RIM took a $485 million pretax charge to write down the value of its PlayBook inventory in December, after shipping just 150,000 of the tablet computers in the quarter. Then in March, the company recorded a $267 million expense for BlackBerry inventory. RIM said at the time that it would stop giving sales and profit guidance because of “ongoing weakness” in the U.S.

RIM has just entered what I call the Post-traumatic period of a phone maker’s life. This period is defined as beginning with a loss-making quarter and ending  with the company’s exit from the business. These post-traumatic periods were visualized first here and the pattern was first discussed about a year ago here. 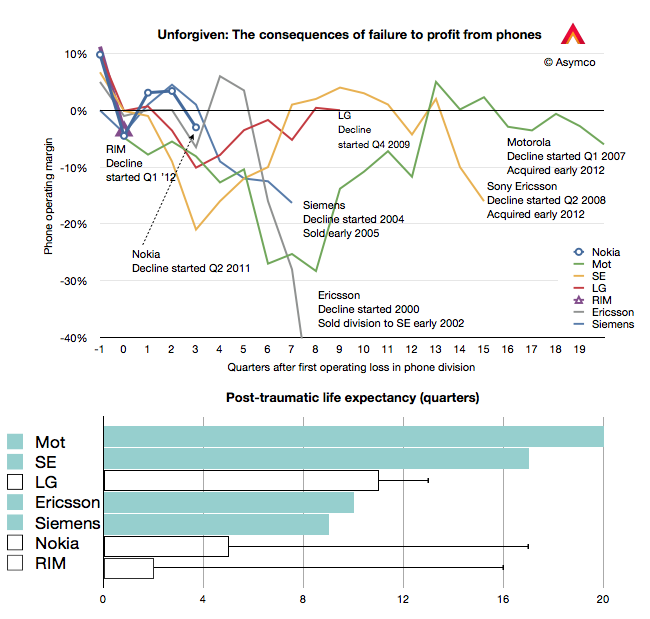 I’ve updated the chart with the current data and added the bar chart below to illustrated the “post-traumatic life expectancy” for the companies shown. Companies still operating are shown with bars without color while companies that have exited are shown with solid color bars.

The pattern may be that companies either have short post-trauma lives of about two to three years or relatively long post-trauma lives lasting 4 to 5 years. What determines this life expectancy and how long do RIM, Nokia and LG have?

There is precious little data, but perhaps one hypothesis I could offer could be that the bigger the commitment to the industry (in terms of having no fall-back options) the longer the post-traumatic period lasts. In other words, as there is no easy way out, the fight lasts longer.

This can also be interpreted using Porter’s “barriers to exit” force analysis where companies which can liquidate a division see it as a low cost of exit whereas companies that need to restructure (usually more than once) and then seek either a buyout or rescue may interpret exit as a very costly endeavor.

Long exits compile larger costs of distress and can cause more pain for stakeholders, especially if the end is inevitable.

Given this hypothesis, as both Nokia and RIM depend largely on mobile phone sales, it’s likely that they will not exit quickly. (Ironically perhaps, LG has a better shot at a quick exit given its diversified conglomerate status.) It might imply that there are at least two more years before Nokia and RIM call it quits.