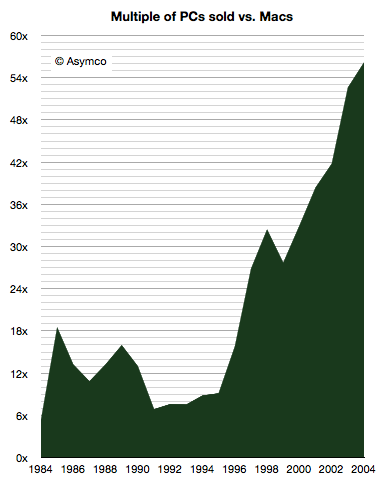 When the Macintosh was launched in 1984, computers running the MS-DOS operating system were nearing a dominant position in the market. Having launched in 1981 as the IBM PC, they were quickly cloned and four years later “PCs” were selling at the rate of 2 million/yr.  The Mac only managed 372k units in its first year.

In other words, PC was outselling the Mac by a factor of nearly 6. It turned out to be a high point. The ratio by which the PC outsold the Mac only increased from there.

During the second half of the 90s it was already clear that Windows won the PC platform war. Windows had an  advantage that seemed unsurmountable.

I should point out that this ratio between platforms is not just an exercise in arithmetic. It’s a measure of leverage. The advantage of dominance is realized in an ecosystem which creates lock-in and additional economies in marketing. Ecosystems become self-perpetuating and there is a tendency toward monopoly. The stronger you are, the stronger you get. 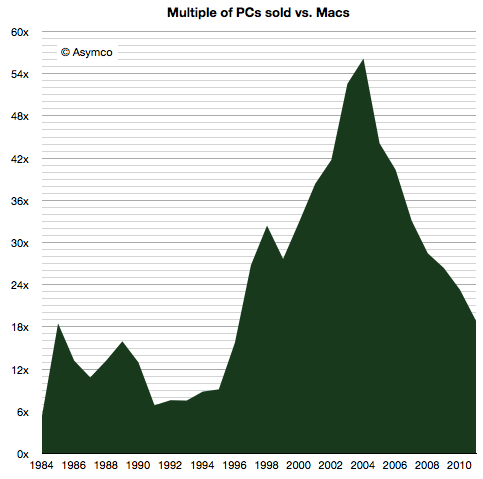 Although PC volumes continued to grow, they did so more slowly and the Mac grew faster. What coincided with this was the emergence of portable computing. The MacBook became easily differentiable as a “better” laptop. It was not faster, did not have more storage or any key metrics being used to sell PCs. It was just better as an integrated product. The integration manifested itself through a sense of quality and robustness as well as intangibles like aesthetics and “feel”. I wrote about this a few years ago.

As a result the Mac began to whittle down the advantage Windows had. The ratio  of Windows to Mac units shipped fell to below 20, a level that was last reached before Windows 95 launched. It’s as if the Mac reversed the Windows advantage. This was an amazing turnaround for the Mac.
But the story does not end there. 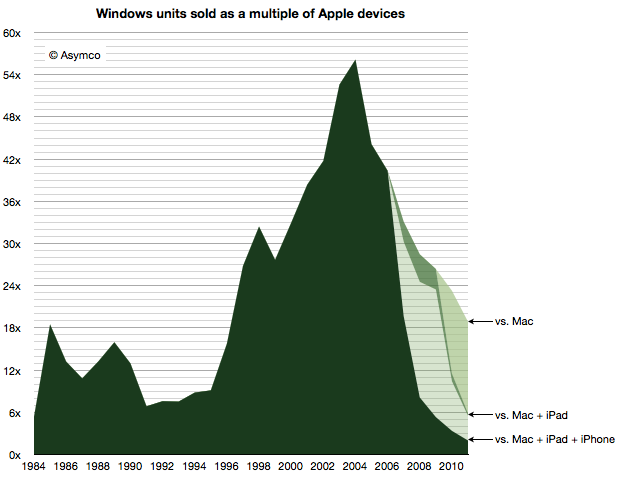 If we consider all the devices Apple sells, the whittling becomes even more significant and the multiple drops to below 2. Seen this way, Post-PC devices wiped out of leverage faster than it was originally built. They not only reversed the advantage but cancelled it altogether.

Considering the near future, it’s safe to expect a “parity” of iOS+OS X vs. Windows within one or two years. The install base may remain larger for some time longer but the sales rate of alternatives will swamp it in due course.

The consequences are dire for Microsoft. The wiping out of any platform advantage around Windows will render it vulnerable to direct competition. This is not something it had to worry about before. Windows will have to compete not only for users, but for developer talent, investment by enterprises and the implicit goodwill it has had for more than a decade.

It will, most importantly, have a psychological effect. Realizing that Windows is not a hegemony will unleash market forces that nobody can predict.