In a footnote to my last post on Apple Retail (The face and the brand) I used data on operating performance from Apple and an assumption about employee salaries (which turned out to be low) to estimate that about 7% of Apple store sales are spent on “cost of service” or the operational expenses, which consist of mostly employee salaries.

An updated view of this store income statement (on a per-visitor basis) is shown below: 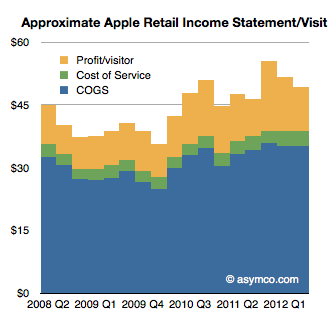 To summarize the logic, during the last quarter Apple received $49.2 in store revenues per visitor. Knowing the retail profit ($10.46/visitor) and knowing the time spent per visitor (14 minutes, itself derived from the number of full time equivalent employees–41,000 or 112 per store) and assuming the cost of that time in employee salaries ($15/hr including benefits), gives us an estimate of the service cost ($3.55/visitor) and therefore the cost of goods sold ($35.2/visitor).

Now I want to focus on this ratio of service cost/sales which turns out to be about 7%[1] and ask whether this is significant or revealing.

In order to do this we have to understand that most stores, especially electronic goods retailers, don’t spend this much on salaries. They do spend quite a bit on commissions however. From a post on the subject, I gathered the following commission rates for various retailers:

Now 7% to 10% that Apple spends on salaries starts to make some sense, economically. It’s roughly equivalent to what another retailer might spend out of their sales on the help.

The difference is that Apple does not pay commissions and that cost is spread over a far larger headcount of staff. Roughly speaking it implies that Apple hires five times as many employees (consider how many people you might see in an Apple store where the average is 112 and in a similarly sized Polo Ralph Lauren outlet) as would be needed to “just sell stuff.”

The trade-off seems to be that Apple will pay a modest wage to a hundred employees rather than a commission to a handful. The trade-off is pretty even since the profits would be the same.

But they wouldn’t be.

The difference is that what the customer buys is different. Or, put another way, a store bursting with staff is hired by the customer to do a different job than a store filled with a handful of “salesmen”.

Even though the economic ratios are similar, the result is that visitors at an Apple store are made to feel they’re getting a service rather than being sold a product.

And that’s the key to there being very many visitors. And, incidentally, they happen to buy more things. And also incidentally they come to value the brand more.

So a simple decision to hire in proportion of a level of service rather than a level of sales leads to completely different bottom line results.

That’s not to say that this model is transplantable. The entire system depends on having the right goods to sell and the right brand image. But if Apple had all those things and imposed a commission structure in its stores, one can be fairly certain that sales would not be as spectacular and growth itself would suffer.