We can put all of our products on the table you’re sitting at. Those products together sell $40 billion per year. No other company can make that claim except perhaps an oil company.

We are the most focused company that I know of, or have read of, or have any knowledge of.

We say no to good ideas every day; we say no to great ideas; to keep the number of things we focus on small in number.

Tim Cook said this in February 2010 at the Goldman Sachs technology conference.

Since then the only product that has been added to the kitchen table has been the iPad. The sales level however, has increased in proportions shown in the chart below.

The revenues are shown with their contributory products and the costs of those products. The payments for costs of sales as well as R&D, SG&A and Taxes are then subtracted revealing the Net Income (in green). This is done for the second quarters of 2010, 2011 and 2012. 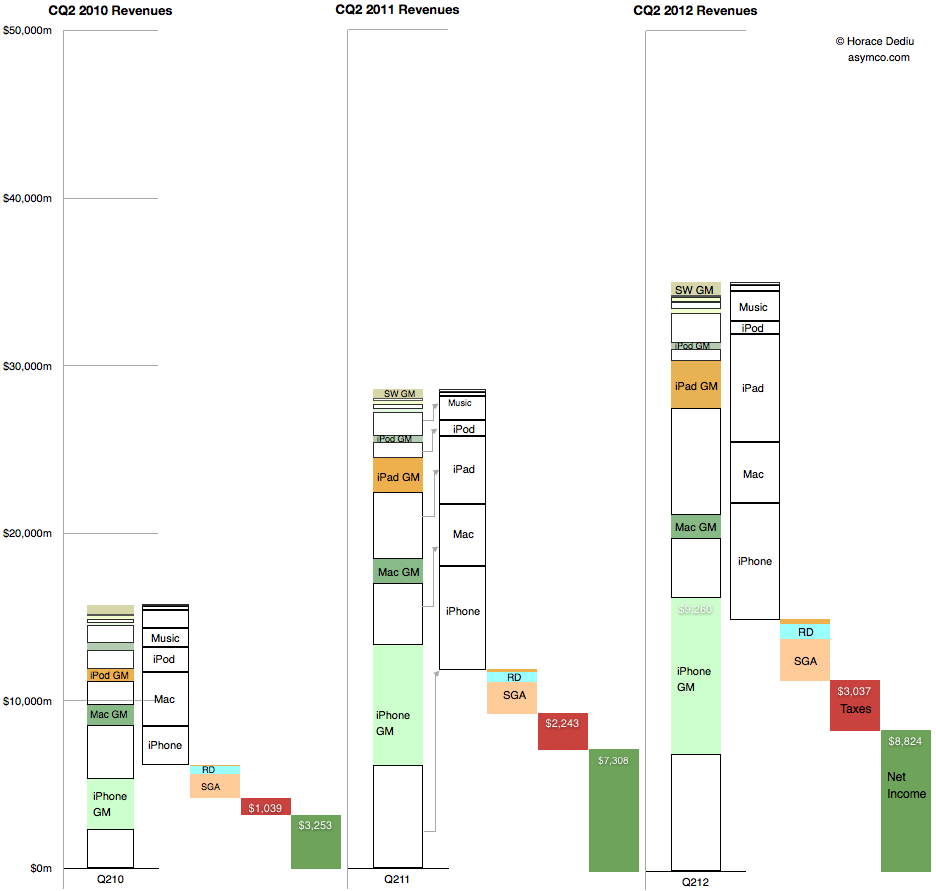 Since Tim Cook made the analogy, the  table holding the products has not gotten any bigger but the sales level has more than doubled while profits have nearly tripled.

In his talk he cited revenues of $40 billion (for the pervious year, 2009). In the last twelve months Apple’s revenues were $148 billion.

I think this is so ingrained in our company that this hubris you talk about that happens to companies that are successful and sole role in life is to get bigger, I can tell you the management team at Apple would never let that happen. That’s not what we’re about. [We have a] Small list of things to focus on.

The irony is that by thinking small, Apple became the biggest company that ever was.

The trick to thinking small is the same as that of “focusing” which means saying no, a lot. I touched on this in February 2011. Focusing is the willful rejection of the Nobel-prize winning theory of portfolios.

From the wiki link above,

Diversification eliminates non-systematic risk, but at the cost of increasing the systematic risk. Diversification forces the portfolio manager to invest in assets without analyzing their fundamentals, solely for the benefit of eliminating the portfolio’s non-systematic risk (the CAPM assumes investment in all available assets). This artificially increased demand pushes up the price of assets that, when analyzed individually, would be of little fundamental value. The result is that the whole portfolio becomes more expensive and, as a result, the probability of a positive return decreases (i.e. the risk of the portfolio increases).

This theoretical view into asset management applies in spades to product portfolio management. The idea that it’s better to spread one’s bets and cover all segments is “safer” has been thoroughly debunked by Apple.

Understanding the “fundamentals” of a product is far more important than having lots of products for the sake of diversification alone.

The fundamentals of a product are knowing its job to be done and thus its requirements which, when well executed, will position it precisely and unambiguously on an opportunity.