When Apple announced five million iPhone 5 were sold to end users over its launch weekend, I was surprised. Not because my guess had been around 6 million, but because the company had set expectations by announcing a doubling of pre-orders from the year-ago 4S launch.

Instead of doubling its performance for the launch weekend the company only sold 25% more units. How can there be this discrepancy? Is this a sign that demand is not growing at the rate we’ve become accustomed to? Is it a sign that there are shortages of components or labor or other production problems?

No, probably none of the above.

What we saw in the 5 million figure is what the company was able to deliver in the hands of buyers. It’s possible that there were people who did not get a phone when they wanted it, and at the same time it’s possible that some phones were available for sale and did not get bought.

This is because Apple offers the product through multiple channels. Some channels like Apple Stores may have gotten too many units while other channels like their on-line store, operator stores or retail partners did not get enough.

Can this really happen?

The fact that pre-orders were twice as fast indicates that online purchasing was much more popular. The company’s press release suggested that only “a majority” of online orders shipped so far and we know that day one delivery of units was only offered to online buyers for 40 minutes.[1] At the same time some stores seemed to have plenty of stock.

This is easily explained. It’s possible that this year a larger group of consumers decided that braving long lines is not their cup of tea. Instead, this larger proportion could have chosen to bravely endure waiting for a package at home rather than the companionship of their fellow man. Maybe the population of buyers is broader this year as one would expect from such a large base, and there are fewer who have the time or inclination to queue for a device.

If the shift to online from in-store was unforeseen, the company could easily have allocated too many units to retail and not enough to online resulting in weeks-long waits for orders placed online and relatively short waits in queues.

It’s easy to fault the company for making this error. However, we can only calibrate our expectations on what we’ve seen before. If the company measured demand in its stores and on-line for three years and saw a pattern, it would make sense to allocate the limited supply according to the same pattern of demand[2].

The pattern for the last three phones is shown below: 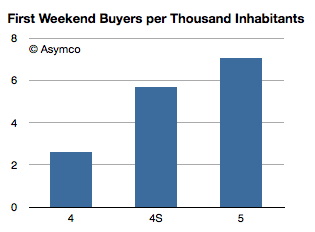 The growth from 4S to 5 is subdued, but it fails to account for the in-transit inventory.  Assuming that due to the misallocation of stock, unfilled online orders number one million then the growth would look as follows: 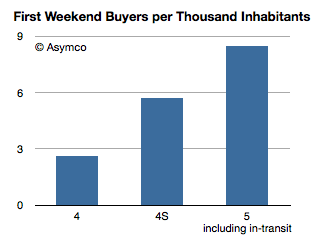 For the markets iPhone launched in, this would be a fairly healthy take-up rate. Anecdotal evidence I’ve seen suggests that 1% penetration on day one is not uncommon.