Last July I asked the question “How many Lumia phones were shipped in the US?”

My answer was 630k through the first half of this year.

As a quick review, Nokia reported the following performance for its mobile phones operations:

The most worrying thing of all however is that Nokia’s smartphone performance has collapsed. With only 6.3 million units shipped, the company may be the worst performer among eight competitors I track. They were below RIM’s shipment total.

The value of 6.3 represents only 7.6% of their overall phone shipments. 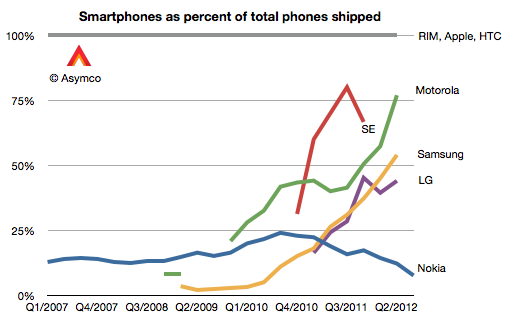 As the graph above shows, Nokia is going in the wrong direction with respect to moving to a smartphone portfolio.[1]

Of the total 6.3 million smartphones (aka smart devices, as per Nokia’s reporting nomenclature) 2.9 million were Lumia Windows Phone units.

Since launch, my estimate is that Lumia has sold 810k units in the North American market.

This cannot be seen as a good performance. There are mitigating factors such as the lack of upgradeability to Windows Phone 8 which probably deflated demand[2]. However, it’s a poignant observation that during the last quarter the US reached 50% smartphone penetration by users. As traction is still absent from both Nokia and Microsoft in the US market, we are back to the question of how to compete.

As the market in the US transitions from competition against non-consumption to competition among rival platforms, the Lumia brand is being forced into targeting smartphone “switchers” rather than smartphone “adopters”. The switching option is expensive, requiring aggressive advertising (see Samsung Electronics’ $11 billion ad budget).

There’s only one source of cash for that sort of strategy.