In previous posts I described the patterns of asset value growth for Property Plant and Equipment at Apple and how that change has been thus far correlated to the production of iOS devices.

The analysis was based on looking at the declared value of the PP&E assets on Apple’s balance sheet. These values include depreciation so they reflect not only the “spending” on new assets but also the value lost due to wear and tear. As such it’s not a perfect measure of investment.

The better approach is to use declarations on the cash flow statement. Apple reports a specific cash flow related to PP&E: Under Investing Activities, Payments for acquisition of property, plan and equipment.

Compare this with the statement in the Annual Report from one year ago:

This means that Apple intended to spend $8 billion, actually spent $8.3 billion and realized a net asset gain (after depreciation) of $7.7 billion.

So there are no major surprises. The spending was only about 4% above expectations a year earlier.

The other pattern to observe is that the spending rose dramatically into the fourth quarter. The fiscal quarterly spending was:

I illustrate this pattern (and previous quarterly spending) in the following chart. 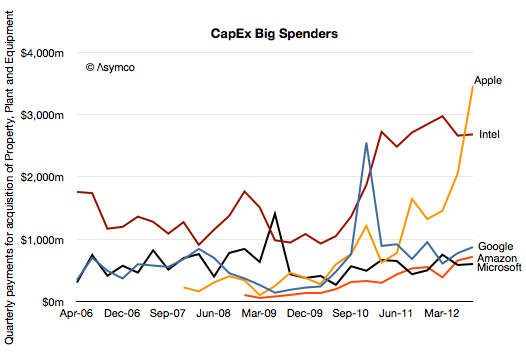 The question remains what is this $8.3 billion being spent on?

To help answer I also added the comparable spending (from cash flow statements) of a few other technology companies. Google, Amazon and Microsoft have been spending in the same range of $500 million per quarter. Over the past eight quarters the average spending of these companies has been:

Intel is different. Its average spend level has been $2.6 billion/quarter.

But Apple has just spent about 30% more than Intel. And it spent three times in Q3 than Google, 4.8x Microsoft and 3.8x Amazon.

The level of spending and growth from a far lower level implies to me that Apple is spending primarily on process equipment (aka tooling) rather than servers. Data centers are expensive at $1 billion for a large one, but they are not being built fast enough to account for $3.5 billion in one quarter.

Note that Apple’s CapEx is above that of Intel whose fab-based semiconductor production method is known as particularly capital intensive. And Intel’s Capital Expenditures have been increasing to all-time highs.

In other words, Apple is spending at the equivalent of one Intel of fabrication and one Google of server infrastructure.

In a few days we will learn what the plan for expenditure for fiscal 2013 is. Historically, the company has roughly doubled spending for each year of the iOS platform. If that continues then Apple will be spending the equivalent of several Intels and several Googles.