Apple’s renaissance began with the iPod. This was not evident right away however. The product was unveiled on October 23, 2001 at a time when Apple’s share price had just fallen 70% from year-earlier levels. It was perhaps a good point from which one could expect a recovery to begin.

It was not to be. One year after the iPod’s launch the stock price had fallen another 20%. Indeed during 2001 the company was in the throes of a “bear market” in its shares. If we measure a time of persistent share price reduction as a bear market, then the one in 2001 was significant. For 154 days, between April 27 and September 28, 2001 the shares fell 38%. This represents the first bar in the following graph showing all the Apple bear markets since then. 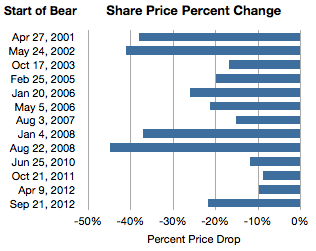 I also illustrated these bear markets in terms of their duration and the average %drop/day.

Sounds dramatic. The even more dramatic twist is that in this same time frame the share price increased by 576 points or the equivalent of 6,294%. Nevertheless, there were 13 episodes when the shares dropped violently and sometimes persistently for long periods.

Why does this happen?

It’s important to recall that at no point during Apple’s ascent was there “consensus”  that Apple was being successful and certainly not sustainably so. Analysts gave it at best a growth prospect of 20%, and the risks were always obvious and prominent.  The company was always on the edge and everybody from the layperson to the experts could see that everything was wrong with Apple. Apple went from being irrelevant to being too big without passing through being boring.

So there is a simple explanation for occasional panic: Apple is not predictable.

But it also seems too consistent. Is the pattern of share price collapse actually rooted in some fundamentals, transient or otherwise? There is a clear failure in understanding the long term but were these downdrafts justified as the market “foresaw” or “discounted” the near future? Were these more than just crises of confidence? Was there wisdom in the drops because they were followed by earnings drops or slowing growth? In other words, if there was smoke, was there fire? Was the market being efficient?

The graph below shows the share price change in the more recent episodes above and the earnings growth during the current and following quarters.

At least since the iPhone launched, every dramatic drop in share price was followed by a surge in earnings growth. One could even say the worse the bear, the better the growth.

Sounds completely counter-intuitive, but there is some perverse logic in this as well. The market reflects crises (as well as over-abundance) of confidence. Unforeseen growth is what creates wealth and the crisis in confidence is a reflection of the improbability of continuing out-performance. When Apple’s performance is foreseeable the stock moves slowly upward. When its performance is unforeseeable the stock moves dramatically downward.

A pithy way of putting it is: No news is good news. Good news is bad news.

In other words, the paradoxical observation in the chart above of “the more drama in the market, the more success in the marketplace” makes sense when inverted.

In that sense the current downdraft may be quite auspicious.
—
Notes: