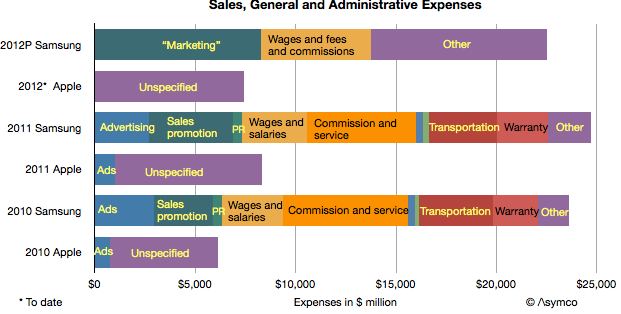 It shows SG&A as reported by Samsung and Apple over the periods 2010, 2011 and the sum of the first three calendar quarters of 2012. Note that Samsung appears to be spending three times as much as Apple on sales and administration.

The company offers a break-down of these SG&A costs and they are also shown (Apple does not provide a break-down except for advertising in its yearly report). The suspicion that something is not right comes from looking not only at the overall picture but the notion that Transportation, Warranty and “Other” for Samsung are higher than overall SG&A for Apple.

Note that Apple’s SG&A includes the cost to operate its retail stores. This includes the salaries and operating costs of over 300 stores.

Excluding wages and commissions shows a total of 15.5% of consumer sales paid in SG&A expenses. Apple’s total cost for SG&A was only 6.5% overall. Advertising was 0.78%.

I also added to the graph data for 2012 (through first three quarters.) It looks like Samsung SG&A will easily reach $30 billion this year, staying at three times Apple for another year.

I don’t have any explanation for this disparity.