In 2011 Microsoft’s CEO bemoaned that revenue in China was about 5% of what it obtained in the US. Yesterday Apple’s CEO suggested that revenue from China will overtake the US in the near future.

The contrast is even more stark when one considers the time and effort each company has made in China. Microsoft has been investing and promoting itself in China for decades while Apple barely had any presence 3 years ago.

To put a finer point on this I show below Apple’s sales by region: 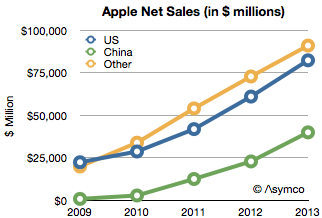 Apple’s China net sales in fiscal 2009 were only 769 million. In 2012 they were $22.8 billion. That is a figure greater than US sales three years earlier. Put another way, China sales grew in three years as much as they did in the US in 33. 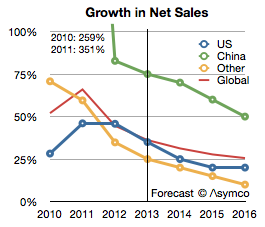 I added an estimate for growth into the future moderating to 50% for China and 20% for the US. If that happens then China will become the largest market for Apple by 2016 as shown below. 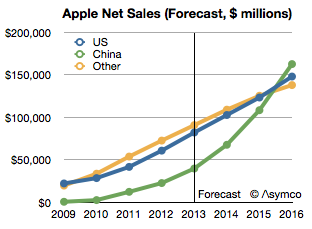 The reason for this growth is, of course, the iOS product lines. Growth started when the iPhone was introduced and surged with the iPad and every time updates were released.

The contrast with Microsoft now comes back into focus. China and the US have a roughly equal number of PCs but the mobile users in China exceed the US by a factor of three to one. The pool of users is so great that Apple obtained its growth even with reaching only 30% mobile network distribution coverage.

Without a mobile portfolio Microsoft is severely hampered. Of course, Microsoft is trying and has made several attempts to place its Windows Phone in the hands of Chinese users. It’s a tough sale however because Microsoft must work through partners. They need to get vendors to license the OS and the operators to range the devices and retailers to push it. Given the flood of “free” Android variants they are having trouble even starting down that long road.

But more fundamentally, Microsoft’s software licensing business model is severely limited in China because what it offers is not what is valued. Both on the PC or on the mobile device, what China values is the tangible. Software can be made valuable only if it can affect the purchase decision of hardware and it can do so only if it’s sold as part of an integrated product. With Surface, Microsoft shows that it understands this. What does this imply for a Microsoft phone?