I last looked at the race to a billion in March 2011. Since then, I’ve been updating and adding data to the set giving a broader selection of platforms to compare.

Before we dive in, an explanation: the initial review excluded Windows (PC) and Facebook mainly because (a)  the ramp scale I’m using is about a decade in duration and (b) I was reluctant to compare platforms that require payment to join to those that don’t. The (DOS/Windows) PC ramped over several decades (starting in 1981) and Facebook is a service that costs nothing to join. There was much gnashing of teeth and shaking of fists as a result.

Therefore, in the interest of inclusion, I added both to the data set and let the chips fall where they may.

The data is shown below. 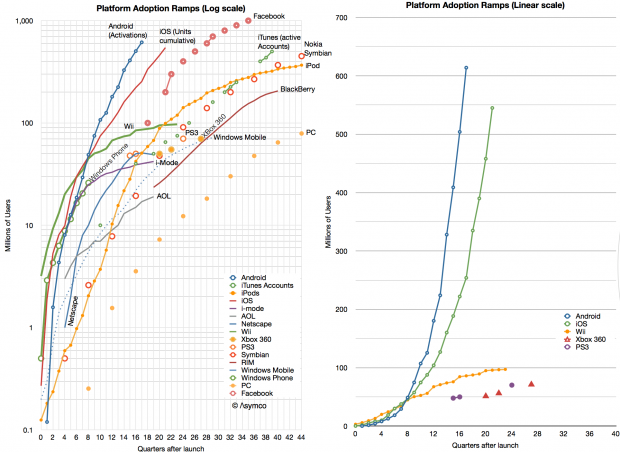 I kept the scale to about a decade so that individual lines can be resolved. As a result, you’ll note that although Windows reached one billion first it did so slowly enough to be off the scale shown. Indeed, the “race to a billion” should be titled  “The race to one billion users in less than a decade”.

In such a competition, the winner would be Facebook which, in October 2012, 35 quarters after launch, reached the finish line. The second looks to be Android (probably this year) and the third iOS (sometime next year.)

That may sound like the end of it, but what the graph also shows are the more subtle trends:

One billion is significant in several ways: First, because it is the “high-water mark” set by Windows and signifies what a global platform needs to become to be essentially “universal”. Second, because it implies sustainability. A threshold perhaps from which network effects are sufficient to sustain (assuming some switching costs and an ability and willingness to adapt e.g. software, content or time investments from users.) Third, because it implies sufficient value to the ecosystem (assuming a monetization mechanism exists e.g. Windows software developers and IT managers.)

Looking beyond this milestone however, there is no reason why it should be thought of as a barrier. Mobile connections number over 5 billion and computing is likely to reach most of them. Therefore one billion may turn out to be only 20% penetration. In fact, I expect this series of posts will need to be updated in 2013 as “The race to two billion.”