During the fourth quarter 2012 Apple’s margin fell to about 38%, a level not seen since two years earlier and down from a peak of 47% in Q1 2012. Does this lower margin foretell lower prices or a loss of competitiveness?

So a margin drop can only be caused if one of three things happened:

We can easily find out which of these was the cause in the fourth quarter because we have volumes and prices for all of Apple’s products. We can also derive total costs based a total gross margin. These are illustrated in the following retina-friendly diagram. 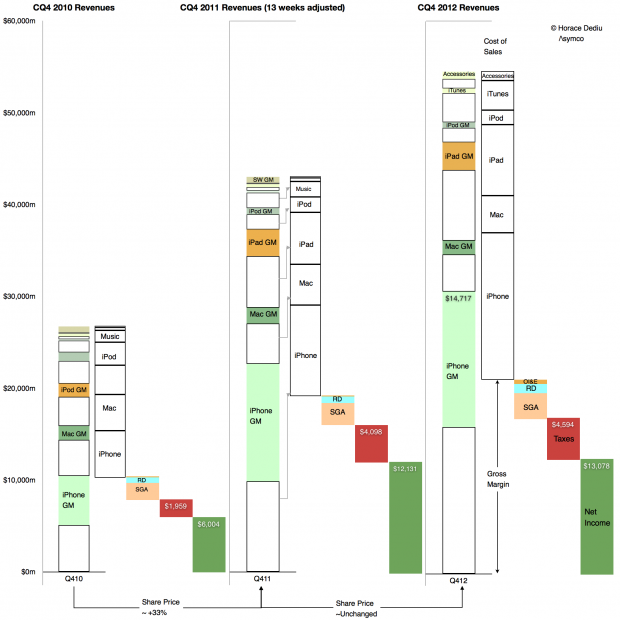 The diagram shows Revenues, cost of Sales, Operating expenses, Taxes and Net Income relative to each other for the fourth quarters of 2010, 2011 and 2012. Of interest is the difference between 2011 and 2012. Note how the 2012 Gross Margin (absolute, not as a percent, identified with the arrow) did not change much from the year before. As Taxes and Operating Expenses did not change much either, the earnings were quite flat y/y.

In fact, pricing analysis was already performed and showed that they largely held steady (iPad being the only decline). If pricing is unchanged then competitive issues are not to blame. The supposed link between lower margins and some mythical loss of competitiveness can be easily disproved.

There is an easily observed cause to changes in production costs. Consider  the opposite effect in the sequential change from the fourth quarter of 2011 to the first quarter of 2012: 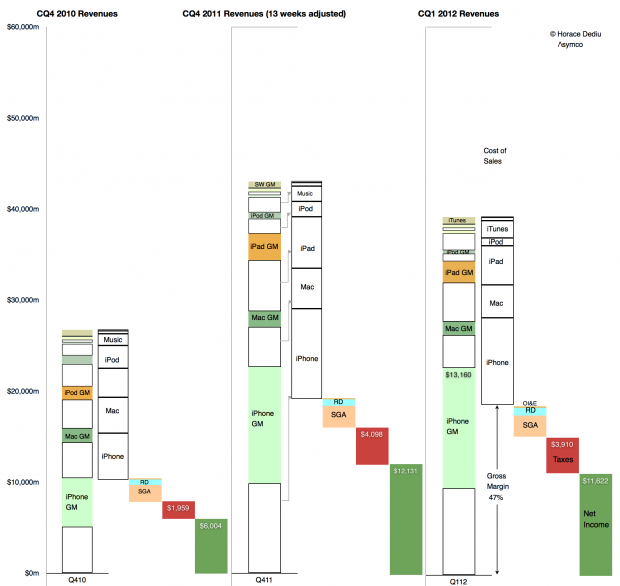 Obviously. Because, as everyone knows, costs of production fall as output increases. It’s due to something called the learning curve. It’s something that has happened for all of Apple’s (or anyone else’s) product launches forever.

What is not obvious is the effect this has on the share price whose changes are shown at the bottom of the first diagram. It’s a case where one margin’s fall has caused quite a few margin calls.