Google announced its first computing product: the Pixel. It’s not the first Chromebook but it is the first device which is uniquely branded as a Google product (Motorola notwithstanding.)

It’s a curious choice given that companies which have “crossed-over” from being service or software oriented to hardware have started with more “mobile” devices. Amazon launched the Kindle as a low-end product and gradually moved it up-market. Microsoft launched with the Surface tablet and then followed with the Pro version as a hybrid laptop/tablet.

It’s also curious since Google has spent years contributing to the development of mobile phones and tablets under the Nexus sub-brand. This was an approach consistent with earlier Chromebooks as well.

But the Pixel is a high-end product. It’s priced at the top of the range of what a laptop computer might cost (given the dimensions).  Perhaps it’s part of a pattern where Google will hone its hardware skills toward releasing a phone or tablet it can call its own. Starting with a more traditional computer is “easier” than trying to deliver on the more demanding smaller form factors.

And yet, the more obvious question is why would Google want to be in the hardware business? Isn’t being a web-focused company implicitly suggesting that hardware is a commodity to be farmed off to perpetually impoverished and violently abused OEMs?

The truth is quite different from this. Samsung currently makes far more operating profit from Android phones than Google does from all its operations. 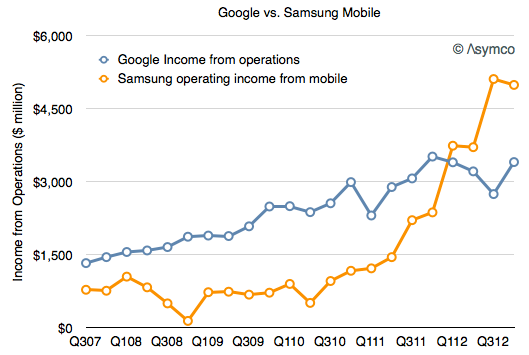 When looking at the patterns of sales and profit capture for hardware vendors since 2007 the contrast is stark: 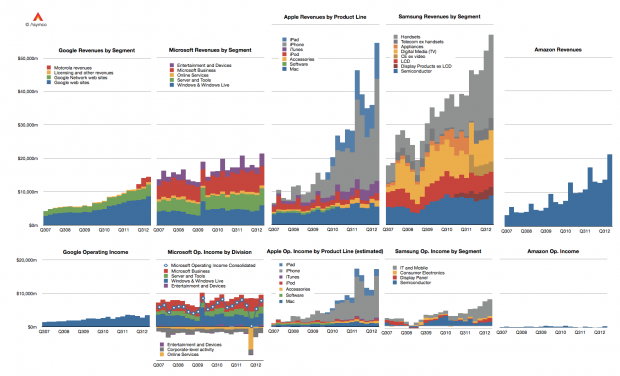 Apple and Samsung tower over the fortunes for software only Microsoft or service-oriented Google and Amazon. Although all companies are growing, the value, as defined by the buyer, resides in the whole product. Putting aside all the theory, the numbers are staggering. Google, Microsoft and Amazon are skimming profits but they are not particularly efficient at profit generation vis-a-vis the integrated Apple (and increasingly integrated Samsung.)

The question is which of the companies illustrated above will prosper from the value chain evolution under way?