The Windows PC market is contracting. The market data has been showing unit shipment declining for some time with the latest quarter having perhaps the steepest decline for two decades.

What remains undocumented however is how the market looks when considering economic value. A more complete picture would be to show revenues, average selling price (or revenue/unit), operating margins/unit and percent of profit capture.

The data is not beyond reach however. It involves combining the shipment estimates from e.g. Gartner with financial reports from the companies themselves. Some analysis is required to estimate margins but they are also not hard to obtain (e.g. from third parties.)

So here is a view of the market for the fourth quarter 2012: 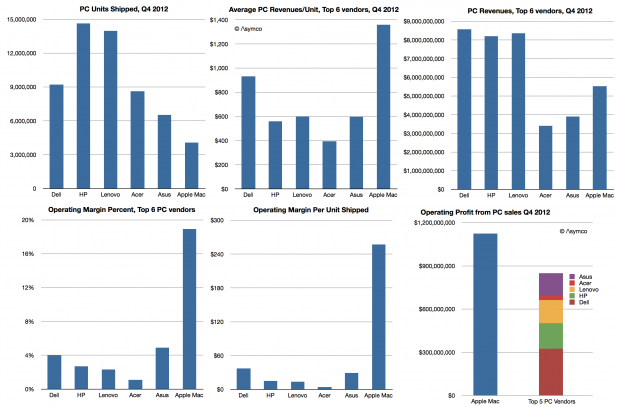 The only inference I made was with respect to Apple’s margins for the Mac. These are based on deriving a gross margin of 26% and adding an estimate of the SG&A and R&D “overhead” of 7.1% of sales, a figure which applies to the entire company. This yield an operating margin of 18.9%.

If this estimate is considered then the operating profits from PC operations imply that Apple generates more profit than all the top 5 PC vendors combined.

Assuming further that “other” vendors have the same profitability ratio as the top 5 combined yields a figure of 45% “profit capture of PC market” for Apple. This is not as good as its performance in the phone market, where Apple has about 72%, but it’s not bad. 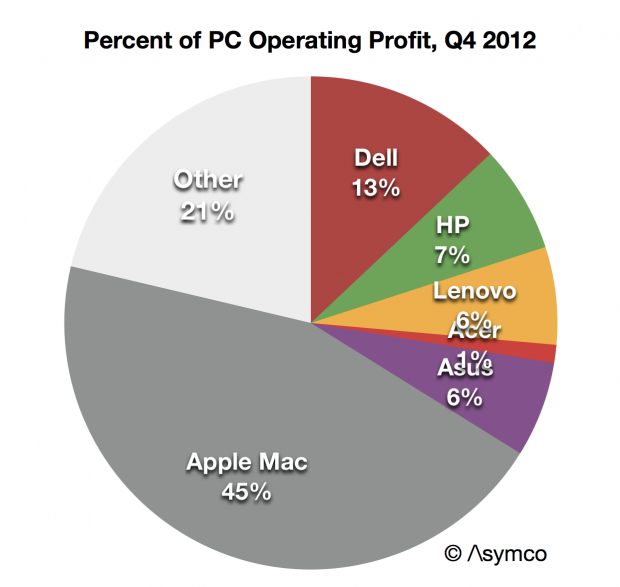 The real problem for the PC vendors is not that they have such low margins–they’ve had low margins for decades. It’s that the volumes which “made up for” low margins are disappearing. Apple is not immune to a gradual erosion of Mac volumes, but they have positioned themselves for growth with devices and content commerce and services. They have essentially “escaped” PCs and indeed caused the need to escape in the first place.

The problem is what could the others do? It seems all they can do is depend on Microsoft getting their strategy right.