Although discussions related to how Apple will “use its cash” center on acquisitions of companies, Apple’s has been busy acquiring, just not companies. It has been buying capital equipment. Capital meaning (in the original sense of the word[1]) the means of production.

Since the launch of the iPhone Apple has spent $21.1 billion on the acquisition of property, plant and equipment. The company has already stated that they will spend another $10 billion or so for the current fiscal year. This has been mostly machinery and equipment used in manufacturing.

The result in asset value is shown below: 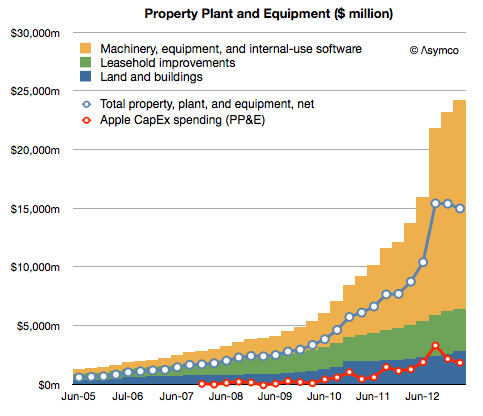 [The Net value, shown as a blue line, is after accumulated depreciation. The red line represents spending as reported on the cash flow statement.)

The change in spending year/year (fiscal) is shown in the following graph: 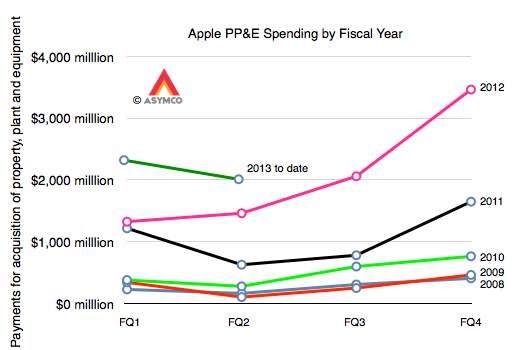 So these are very large numbers, even compared to other capital-intensive semiconductor manufacturers: 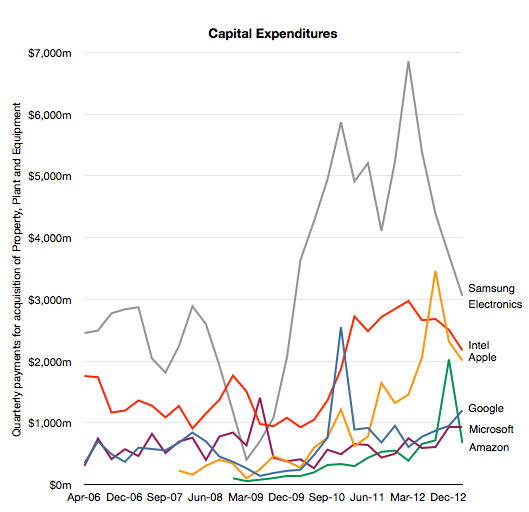 Given this enormous spending one could imagine it’s the subject of intense scrutiny. However the only question on the subject that I’ve ever seen was from Steve Milunovich of UBS to which Peter Oppenheimer, CFO offered an explanation:

Steve Milunovich – UBS
…second question would be on CapEx, you spent almost as much Intel does. I think you guys have said you’re not going to become vertically integrated per se but in a sense you are since [you buy] equipment for your partners, could you talk about the strategy here and how much of a differentiator this gives Apple in terms of your ability to ramp new products over time? And maybe a little bit more about how deep you will go in terms of semiconductor components for you, etc.?

Peter Oppenheimer – Chief Financial Officer
Sure. Steve it’s Peter. We expect to spend about $10 billion in CapEx this fiscal year that will be up little under $2 billion year-over-year. We expect to spend a little bit under $1 billion in the retail stores. And the other $9 billion is spent in a variety of areas. We are buying equipment that we will own that we will put in partners’ facilities. Our primary motivation there is for supply, but we get other benefits as well. We are also adding to our datacenter capabilities to support all the services that Tim spoke about in answering Ben’s question and in facilities and in infrastructure. So, that’s where the capital is going.

I would say that this is not a very satisfying answer, which is why I thought it merits further questioning[2].

Whereas there is a constant clamoring for Apple’s to use its cash to “acquire” or “buy” something, anything, maybe people not looking hard enough. If you need the satisfaction that comes from knowing that money is being spent, a glance at the Cash Flow statement and Balance Sheet shows that Apple buys the equivalent of one Yahoo! every three years[3].

The main difference with this type of acquisition is that there is less value destruction. Using the capital to ensure access to capacity, differentiation and hence a high margin is better than writing off the goodwill after a few years.