This week Apple announced that iTunes has 575 million accounts. This is the 8th update (that I know of) over the last four years. The history of this data is shown in the following graph. 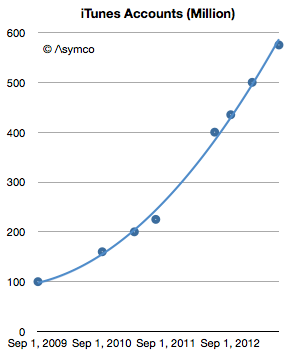 The number of accounts has increased by almost a factor of six since late 2009. It amounts to an account growth rate of about 500,000/day or 44% compounded annually. Not bad, but along with this increase what happened to revenues per user?

Looking at iTunes revenue (gross) reveals a picture of revenues/account, shown below: 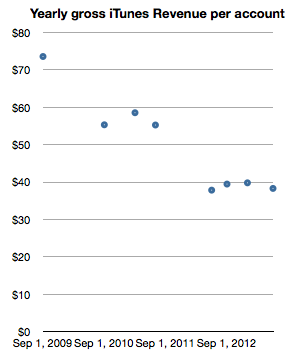 This can be read as: “Each of the current 575 million accounts generates about half the revenue of the 100 million accounts of 2009.” One would expect such a decline as an user base expands and this approximate 50% decline in revenues per account seems reasonable for a six-fold base increase. In absolute terms the graph shows that an iTunes account generates about $3.2/month in transactions.[1]  Put another way, during the last year, an average of $40/yr of economic value is generated by every iTunes account.

Stretching further, one could also use the 575 million iTunes accounts as a proxy for “the Apple customer base”. The assumption would be that iTunes accounts are attached to some Apple product, be it an iPhone, iPod or Mac. As a bounds check, a total of 865 million Apple devices (which interact with iTunes) have been sold since 2007. Assuming 575 million users does not seem to be a contradiction. 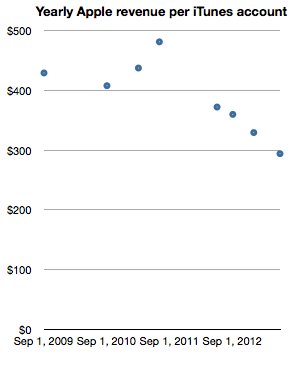 Note again the reduction in revenue per “customer” as the base grows. The reduction is less pronounced however, with about one third lower spending for a sextupling of the base. One can read this graph as “Three years ago an Apple customer used to spend $400/yr on Apple products but as the number of users increased six-fold the spending decreased to about $300/yr per customer.”

The practice of valuing a company by the rate of spending of its customer base is not uncommon, especially when the customer base is relatively loyal. Apple emphasized the importance of customer satisfaction (and, implicitly, loyalty) during its WWDC presentation. It was singled out as the most important metric they track. So perhaps valuing Apple itself on the basis of repeat purchase behavior should be considered.

When framing the value of of the company itself as a function of users (in the form of iTunes accounts) we get the following graph. 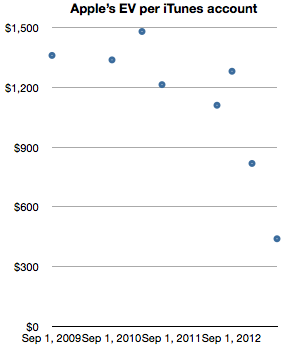 It shows that for a number of years—from 2009 until late 2012—Apple’s users were valued (implicitly by the stock market) as likely to create a net present value of about $1200 in earnings. The current value is about a third of that, or $440 in earnings. Today’s expectation is therefore that each current customer will buy the equivalent of 1.8 iPhones. And nothing more, ever. A few months ago it was expected that each customer would buy three times as much.

Although the rate of spending of each customer is decreasing, the number of new customers is increasing more rapidly. As this is happening the company’s equity is being priced such that an Apple user is considered less than half as valuable as she used to be—from 3.2x revenues to 1.5x revenues. This change in user value has been quite abrupt, happening only within the last nine months. What could justify a drop in user value would be a drop in customer satisfaction or loyalty. So far, I have seen no evidence of this happening.