In late April we executed a very successful debt offering issuing 17 billion of debt across 3, 5, 10 and 30 year maturities. We paid $2.8 billion in dividends in the quarter and we also utilized a total of $16 billion in cash on share repurchase activity through a combination of a new accelerated share repurchase program and open market purchases. $12 billion of the $16 billion was utilized under a new ASR program initiated with two financial institutions in April.

An initial delivery of 23.5 million shares was made under this program with the final number of shares delivered in average price per share to be determined at the conclusion of the program, based on the volume weighted average purchase price of Apple’s stock over the program period, which will conclude in fiscal ‘14. In addition to the new ASR, we executed $4 billion of open market share repurchases, resulting in the retirement of 9 million additional shares.

Tavis McCourt – Raymond James: Thanks for taking my question. Peter, first a clarification on the share buyback and can you tell us what the ending basic share count was in the third quarter?

Peter Oppenheimer: All of that is on the income statement, so you got the ending basic and diluted, but let me give you a couple of points that I think could be helpful for you. During the June quarter, we concluded the first $2 billion ASR program that we started in December and then so we got the final shares in on those, and we did our second ASR program of $12 billion, that started at the end of April and we received 23.5 million shares initially on that. And I went through in my prepared remarks, at some point during fiscal ‘14 that program will close and we will get the final number of shares. We also bought back $4 billion of stock in the open market during the June quarter and received about 9 million shares. So, the impact of those in the June quarter lowered our diluted share count in the quarter by about 22.9 million shares. And as you look forward into the September quarter before any further buybacks or any issuance to employees we would expect to see an additional approximate 11 million share benefit from the things that occurred during the June quarter.

This is a bit convoluted, but it seems that Apple has committed to buy $16 billion worth of its shares but has not completed the retirements. They see an additional 11 million shares being retired from activities conducted in the June quarter. (Nota bene: when calculating future EPS, take these shares out of consideration.)

If we add the 11 million yet-to-be-retired to the 21.7 million already retired and assume $16 billion was paid for them then the average price paid was $488.25.

Not a bad price. Share re-purchases are valuable only if the price paid is low (a determination that is usually beyond the scope of management to make.)

But what is even more interesting is that if we consider the $16 billion expenditure as an acquisition, then Apple has made what amounts to its biggest. It’s more than some familiar companies are worth: 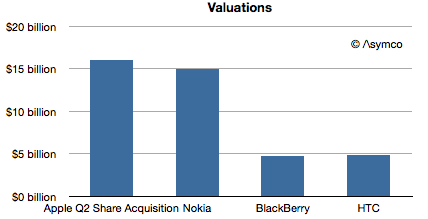