In June of 2011 I asked “Does the phone market forgive failure?” Not much time has passed since but the answer still seems to be no. The trigger I was using for this point of no return when the vendor began making losses.

The list at the time consisted of 13 phone vendors who either merged, were liquidated or acquired after this trigger point was reached. There were no examples of vendors who recovered. Since then two more vendors reached the threshold (Nokia and RIM) and a third will do so this quarter (HTC). One vendor (LG) may be recovering but Nokia has just been acquired and RIM has put itself up for sale. Some Japanese vendors like Panasonic have also called it quits since then. So the score so far is about 18 triggers, 15 exits and three pending.

Some of this data is summarized in the following graph: 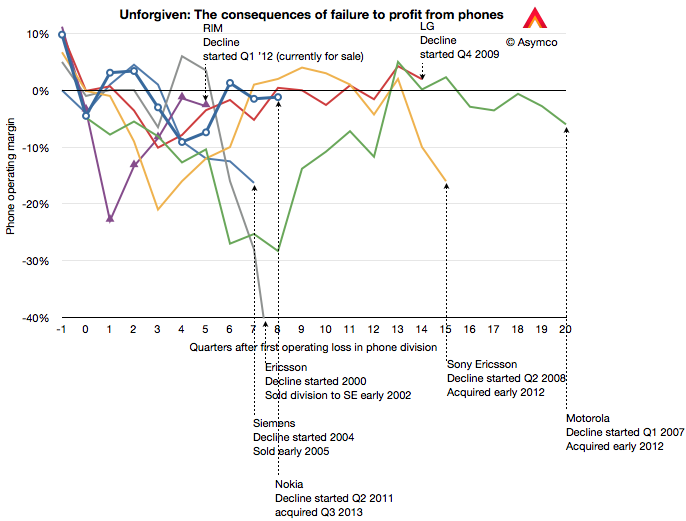 It shows that post-trauma life expectancy is now running at about 2.5 years. As RIM is only in its second year, one could perhaps expect another 6 to 9 months of independence. HTC could go on until 2015 but the smaller the company, the more vulnerable, so HTC’s exit time should be shorter.

The exception might be LG which seems to be recovering. As a conglomerate, LG is much less vulnerable and might have the resources internally to sustain the phone business indefinitely.