Publicly, Mr. Lazaridis and Mr. Balsillie belittled the iPhone and its shortcomings, including its short battery life, weaker security and initial lack of e-mail. […]

Internally, he had a very different message. “If that thing catches on, we’re competing with a Mac, not a Nokia,” he recalled telling his staff.

From How BlackBerry blew it: The inside story – The Globe and Mail

The whole article is worth reading, detailing as it does the decision process inside BlackBerry during the painful disruption of its core business.

What struck me most however was how similar their decisions were to those of Nokia at about the same time. Consider:

The parallelism of this synchronized failure can be seen in the following graph showing smartphone volumes. 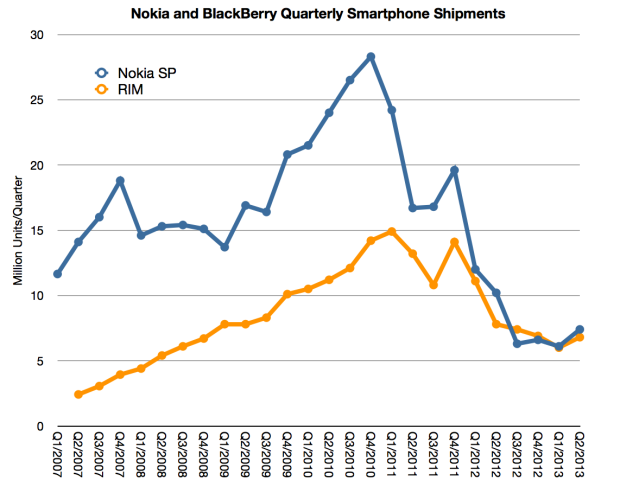 The striking thing is how the two companies peaked are almost precisely the same time and how that moment (end of 2010) was not related to the entry timing of their nominal disruptor.

Recall that both companies cite the iPhone as the factor which caused a shift in the basis of competition. But the iPhone launched in mid 2007 (at the beginning of the graph’s date range.) BlackBerry had 16 quarters of growth after the iPhone and Nokia nearly the same. The stock prices of the companies also prospered for a period long after the iPhone entered the scene validating a do-nothing approach. So this is the crux of the incumbent’s dilemma: how do you rally a response when you don’t feel any pain? It’s worse actually: how do you embark on a painful course of action while feeling comfortable and safe?

The reason the companies did not suffer immediately from the iPhone was because it (and its Android equivalents) took time to reach the core customer bases. Remember that the iPhone was not “good enough” to be an enterprise product at launch and Android was not the first to serve the low end of the market, where Nokia was dominant.

Vision is worth exactly nothing without timing.

But enough about ancient history. The crucial question is what does it teach us. It’s tempting to suggest that this disruption is happening again with the iPhone today.

There is one big problem with this. The iPhone was not a low-end disruption. It was exactly the opposite. The BlackBerry and the Nokia products were striving for the low end. They observed the discipline of constrained resources. They were expanding into emerging markets. They watched every fraction of a penny on the bill of materials. The low end was manna for the whole industry. Even Microsoft with Windows Mobile was better positioned for the low end than Apple.

Instead, what Apple did was unthinkable. It entered with a high end product. It even promoted its high price ($500, subsidized!) This is why it was laughed at.

Disruption is not a process that merely rewards breaking convention. Any fool can rebel against the status quo. To change it requires a process that rewards asymmetric competition. Finding a way to be seen as irrelevant and yet conquering at the same time. Being disruptive is, above all, being imperceptibly valuable.

For iPhone the core asymmetry was that it was a computing product and not a telecommunications product. Every decision thereafter flowed from the calculus of computing and not the compliance with telco convention. The ecosystem, the rapid rate of improvement, the rich user experience, the tie into other product lines.

It was this asymmetry which confused every observer. Predicting how a high end product can conquer the low end is fiendishly counterintuitive.

In contrast, spotting low end disruption is a parlor game. There is little challenge in observing a cheaper alternative competing as a commodity. For  evidence look at how markets react. Whereas they could not understand the value of the iPhone (or iPod or iPad) they reacted instantly to the whiff of a commoditization play. Angst surrounding cheaper alternatives pervades.4

The problem with the low end disruption thesis is that low end is also much easier to respond to, especially now that everyone read the book. The incumbent simply needs to have a flexible cost structure and a vast margin to dip into. Most failures to respond to a low end disruption come from companies stuck in a high cost structure not from a failure to see a low end alternative.5

Apple’s costs are mostly variable and their fixed (R&D and SG&A) are growing far slower than sales. There are huge margins and more cash being spun out than anyone can figure out what to do with it.

The distressed response to the low end tends to be a retreat into the higher margins and an abandonment of existing customers.

I don’t see Apple doing either. Rather, it is gradually adjusting its portfolio toward lower end alternatives. Note that demand for the lower end product is far less than for the high end. Instinct would suggest that they should have stuck with the 5S alone. But it moved down anyway. It also did so with the iPod, iPad and Mac mini.

The idea that Apple is vulnerable to the low end is a relic of an idea. It goes back to the Mac of the 1990s, at a time when the world-wide computing market was orders of magnitude smaller than today and where purchasing and development decisions centralized in the hands of a few large companies6. And even when looking at that competition, the Mac somehow managed to survive.

That’s not likely to be the case for those who found themselves in competition with the Mac in its pocketable re-incaration.