During the first quarter of fiscal year 2014, we changed our organizational structure as part of our transformation to a devices and services company. As a result of these changes, information that our chief operating decision maker regularly reviews for purposes of allocating resources and assessing performance changed. Therefore, beginning in fiscal year 2014, we are reporting our financial performance based on our new segments; Devices and Consumer (“D&C”) Licensing, D&C Hardware, D&C Other, Commercial Licensing, and Commercial Other.

The previous reporting segments were:

I show the difference between the two structures in the way revenues are allocated below, using color to try to show similarities. 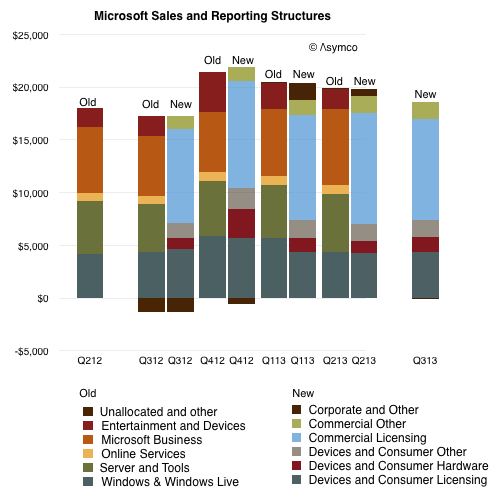 Given the re-stated quarters it’s possible to compare one year’s historic performance at a segment level. For example, the company states that “Devices and Consumer revenue grew 4% to $7.46 billion” while “Commercial revenue grew 10% to $11.20 billion”.

Since we don’t have data older than one year, our ability to assess the company over longer time periods will be drastically reduced and a new picture will take a long time to emerge.

There is however one aspect of the new structure that needs to be appreciated right away: the allocation of costs has changed fundamentally. The company explains:

We do not allocate operating expenses to our segments. Rather, we allocate them to our two segment groups, Devices and Consumer and Commercial. Due to the integrated structure of our business, allocations of expenses are made in certain cases to incent[sic] cross-collaboration among our segment groups so that a segment group is not solely burdened by the cost of a mutually beneficial activity as we seek to deliver seamless experiences across devices, whether on premise or in the cloud.

In that brief paragraph Microsoft has formally and in a financially binding way declared itself to being a functional organization.1

The mechanism seems banal: operating costs are no longer assigned to product divisions but to two large buckets. In practice this means that profitability (P/L) cannot be assessed or assigned to individual managers. The lack of P/L responsibility means that incentives from top to bottom have to be re-engineered. If this goes wrong, the Assets2 of the company could evaporate.

If the assets go, then processes and priorities are for naught.

In other words, what the company is undertaking is a priority shift (to a  functional structure to create integrated experiences) which requires a process change (whereby employees work according to new incentives) while preserving the fragile assets the company depends on (a motivated and skilled base of employees.)

This makeover is as ambitious as a re-org gets and the context, scope and target are as difficult as they can be. This is, after all, the largest software company operating the the most dynamic industry whose multi-sided markets are notoriously volatile due to disruptive forces.

The challenge also suggests why Ballmer left and who should replace him. A priority transplant operation requires a different set of skills than those held by the manager who created the processes for the previous set of priorities. That’s the manager’s dilemma: even if you foresee the changes needed and push for them to be enacted, your reward might be to be replaced by someone who can make the changes happen.

Those who envision and persuade for change are rarely allowed to enact it.