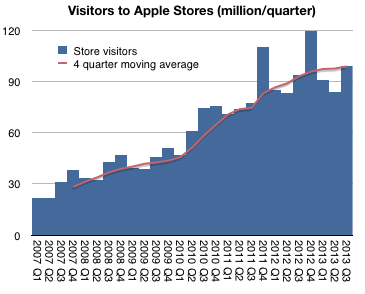 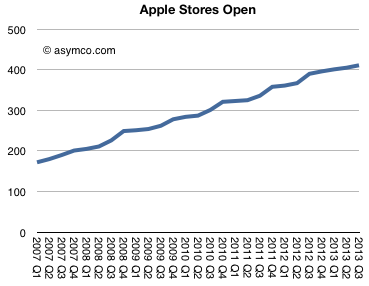 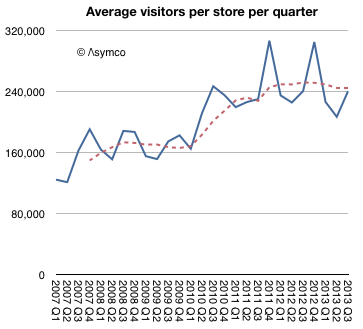 I think we can rule out staffing changes. The data shows that staffing ramps with visitors and there was no specific “quantum” increase in employment (on a per-store basis or otherwise). 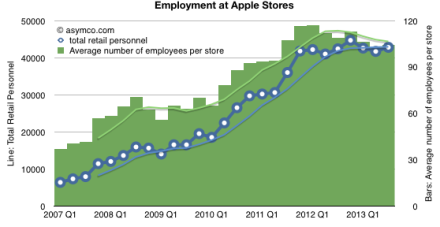 Re-design as a cause has some more merit. On one hand, we have seen bigger stores opening and many more flagship stores. We have also seen specific renovations of existing stores. We have also seen re-designs where the layout was changed to allow for more traffic. The only problem with this as a cause for the quantum leap is that these changes are constantly under-way and have been for some time. It’s hard to point to a specific “big bang” redesign across the board in early 2010 as possibly a cause.

That leaves product. Here we have a clear suspect. The iPad launched exactly at the point in time when the visitor count leaped. In my opinion this is the best explanation.

Let’s remember also the comment from Ron Johnson at the time of the iPad launch. He said that it was as if the stores were designed for a product like the iPad. In other words, the iPad is something that needs to be discovered with a retail experience. You can sense this when you visit the stores and the placement of the iPads within.

It all points to a something more profound: that the stores are brand ambassadors. Apple products create a purchase decision by speaking directly to  the users. For the type of product Apple makes, that conversation can only happen face-to-face. The place where this meeting happens is the store.