For the year ending October Apple’s R&D costs were $4.475 billion. These costs have been rising. Though, as the company explains, not faster than net sales:

The growth in R&D expense was driven by an increase in headcount and related expenses to support expanded R&D activities. Although total R&D expense increased 32% and 39% in 2013 and 2012, respectively, it remained fairly consistent as a percentage of net sales.

We can see this in the following graph: 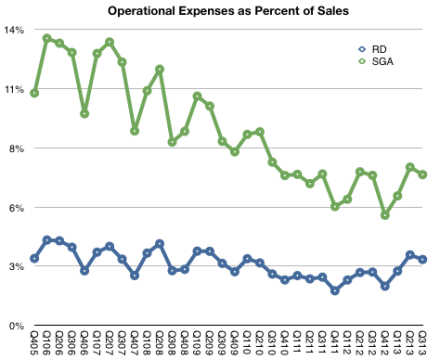 The growth in SG&A during 2013 was primarily due to the Company’s continued expansion of its Retail segment and increased headcount and related expenses, partially offset by decreased spending on professional services.

The change in R&D and SG&A on a full-year basis is shown below. 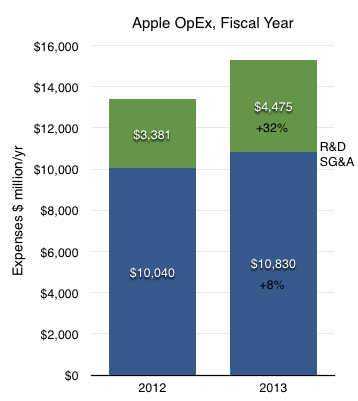 I emphasized the mention of increases in headcount. We cannot know with any precision what portion of last year’s $15 billion in operating expenses went toward wage expenses since there are other costs such as advertising1 commissions and public relations in the case of SG&A and outside services, equipment leases, in the case of R&D. However, it’s more likely that wage expenses are a far larger proportion of total R&D than they are of SG&A.

My estimate, based on wage rates, is that there are approximately 15,000 R&D staff at Apple. 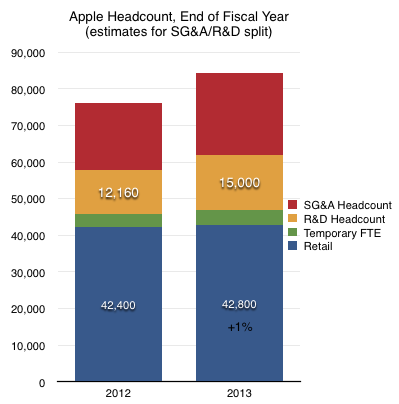 If we divide sales by this number we get $11.4 million in sales per engineer.