Other companies will report their full year ad spending later but their previous years’ spending is shown below. 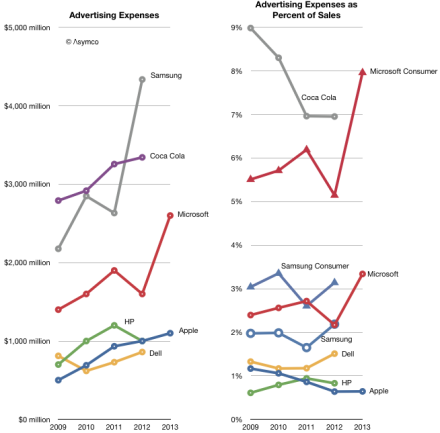 I added a second graph showing the percent of sales that each ad budget represents. Note that Coca Cola retains the crown as the most prolific advertiser when it comes to budgeting.1

However, Microsoft is climbing into a region of 3 to 5% of sales. What’s even more striking is that we can isolate the revenues which are actually being targeted by the ads: consumers. Microsoft’s Business and Server and Tools divisions may have some ad budget but it’s likely to be much smaller than the Windows, Entertainment and Online divisions.

When the ad budget is measured as a percent of consumer sales, Microsoft suddenly looks like the biggest spender overtaking even Coca-Cola.2 I don’t know what to make of this. It seems extraordinary that Microsoft needs the same level of effort to sell software (and some hardware) as Coca Cola does to sell soft drinks. Coca Cola spends heavily to preserve brand value for what is essentially a commodity product. Is this the way to read Microsoft’s marketing?

It’s also interesting that Apple spends the least (nearly) in absolute terms and fractionally less (one twelfth) in relative terms. This is in contrast to the alternatives above. The stronger, more differentiated the product, the less it needs to be propped up by the ad.