The adoption of smartphones in the US is on track for reaching 90% of the available audience by August 2016. This is a mere eight years after smartphones reached 10% penetration. As far as technologies go, that’s pretty fast. To get an idea of how rapid, I plotted a few other technologies and the time they took to grow within the US market. 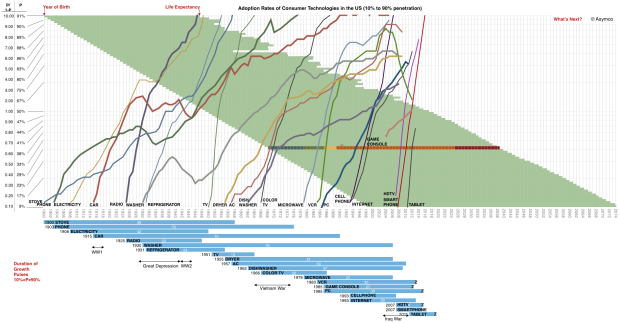 A few things to note:

You’ll also note that the time frame does not end today but that the technology curves do. The time frame includes the expected lifespan of someone born in 1998.

What will they see?

There is a lack of visibility or certainty among observers that anything worthy of inclusion on this graph will ever emerge.

And yet, when glancing at this graph, it would seem that the addressable market, the rate of introduction of new technologies and the speed of adoption have all increased. The area to the right of 2013 looks inviting to a plot of many lines.

Indeed, for the canvas to remain blank would be the riskiest of bets.

What would you put upon it?