GSMA Intelligence reports provide valuable statistics on the growth of mobile networks. One in particular shows the history of regional smartphone penetration.

I took the historic data and plotted it as follows: 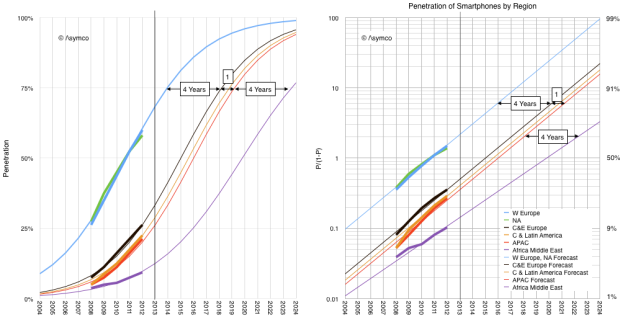 Note that I chose to model using the same logistic function that I have used to describe the US market (as measured by comScore) and the global Internet user market (as measured by the ITU) and the stove, landline phone, Electricity, automobile, consumer radios, washing machines, refrigerators, TVs, dryers, air conditioning, dishwashers, microwaves, VCRs, PCs, cellphones.

If we believe that smartphones in parts other than US and Europe will behave the same way as all the other technologies listed above then the forecast penetration is likely to follow the thin lines in the graphs above.1

With the exception of Africa and Middle East, note that the primary difference between regions is not the rate of growth in penetration but rather the delay in adoption. I marked this delay as 4 years between US/EU and Central & Eastern Europe. An additional one year delay to Asia Pacific region and 4 years more to Africa/Middle East adoption.

The resulting smartphone user forecast is shown below. 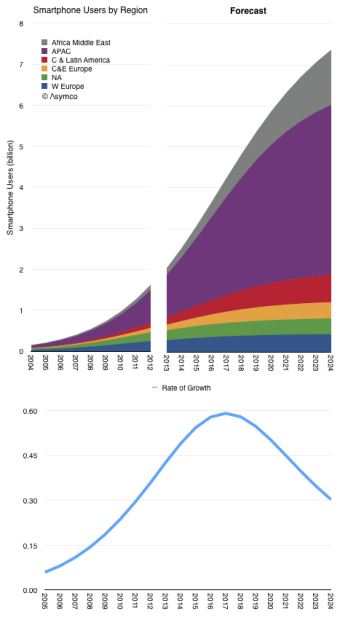 Although 2013 was often cited as the year when smartphones saturated (“everybody that wants one has one”), the total population of users will likely take another decade to reach maximum. The point of inflection in global growth could be expected in 2017.

What most observers sensed was the point of inflection in growth in North America and Western Europe. Those regions are 11% of the world’s population.