This pattern is shown below: 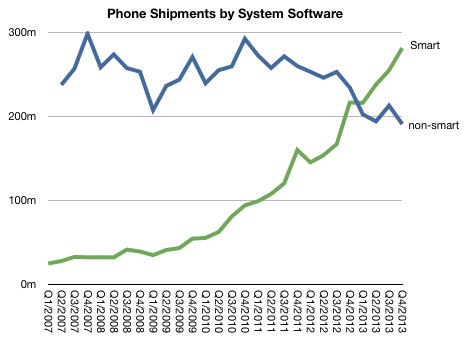 Note that prior to 2012 the non-smart market seemed to be holding steady in spite of the growth in smartphones. The notion that smartphones would become universal was widely dismissed. I certainly heard many objections to my 2010 hypothesis that not only would smartphones become ubiquitous but that it would become increasingly difficult to find anything else to buy. (This in spite of the clearly evident demand for “low-end” non-smart devices.)1

I also suggested that the notion of distinguishing phones with the”smart” tag would become irrelevant and that we would just call these devices “phones”. That is coming to pass, at least among the conversations I’m privy to.

So if the conversation is about “phones” and the expectation that all phones will be smart, what can we observe about the market? The following graphs provide the picture of shipments, revenues and operating margin in absolute and relative measure for the most significant brands. 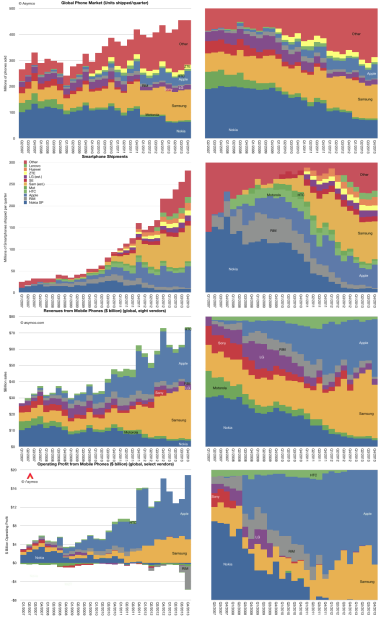 This arrangement shows the disruptive effect of adding “smart” to phones. In only a few short years2 profits have dramatically shifted in the industry.

Indeed, since the launch of the iPhone3 the net profits earned by the collection of protagonists shown was $215 billion4.  60% has been earned by Apple, a newcomer to the market. That figure is also consistent on an ongoing basis, having reached 60% as early as 2011 and remained in a band around that figure since. 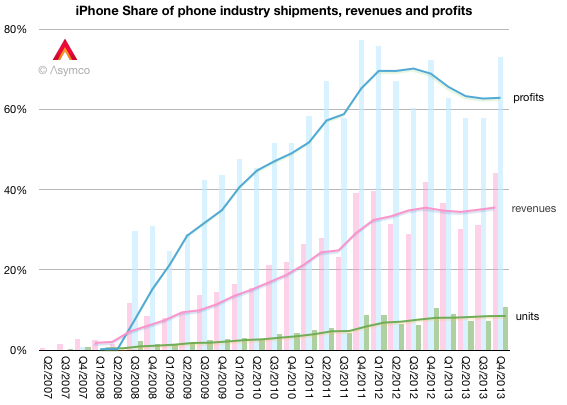 The fact that this happened without corresponding dominance in units shipped shows evidence of something startling: Consistent value creation.

To earn profit is hard, to do so in an outsized way is very hard and to do so with consistency shows a defensibility of market access that is rarest of all. The only cases where this typical is in a monopoly or protected market situation (aka cronyism.) Apple’s lack of market monopoly coupled with a (near-) monopoly in profits can only be explained by disproportionate value creation.

The mystery then is how is it possible to build a monopoly in value creation.