There are 7.1 billion people on Earth. Coincidentally there are also 7 billion mobile connections.  Those connections are held by 3.45 billion unique mobile subscribers.1 Unsurprisingly, the largest national mobile markets (by number of subscriptions) correspond closely to the most populous nations. 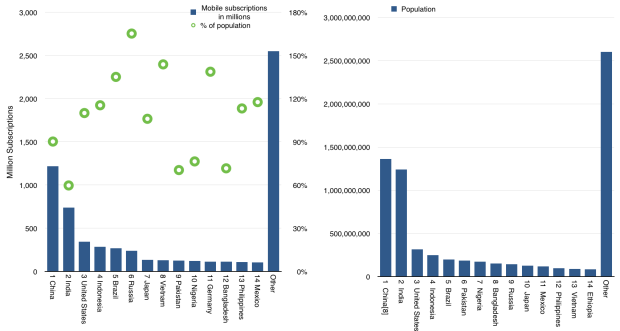 Considering smartphones, last year 1 billion smartphones were sold and the number of smartphones in use is about 2 billion2

Given the rapid adoption of smartphones, it’s also safe to assume that smartphone penetration will follow population distribution. In the US, where comScore data is published monthly, penetration is following a predictable logistic curve. 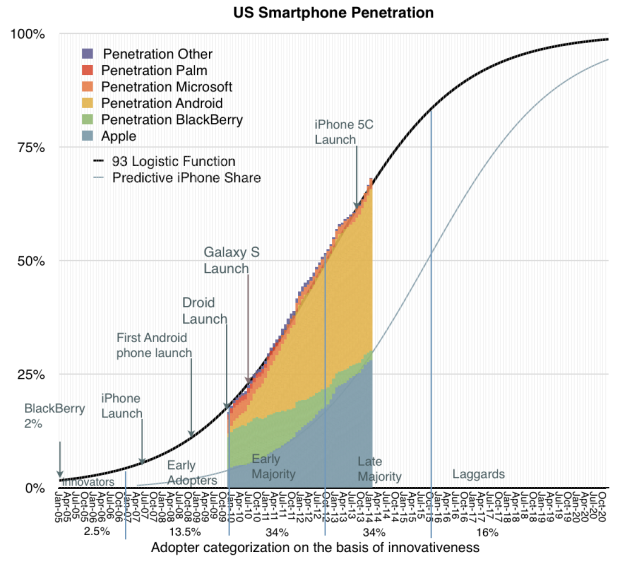 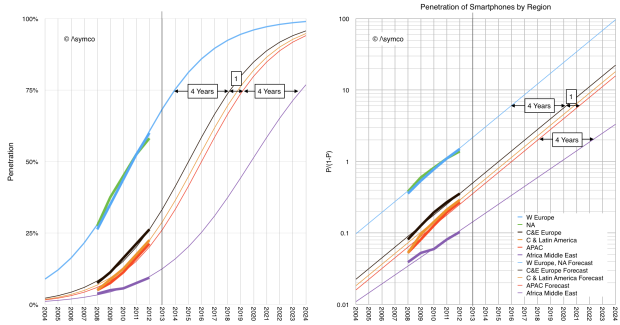 This yields the following forecast for smartphone usage world-wide. 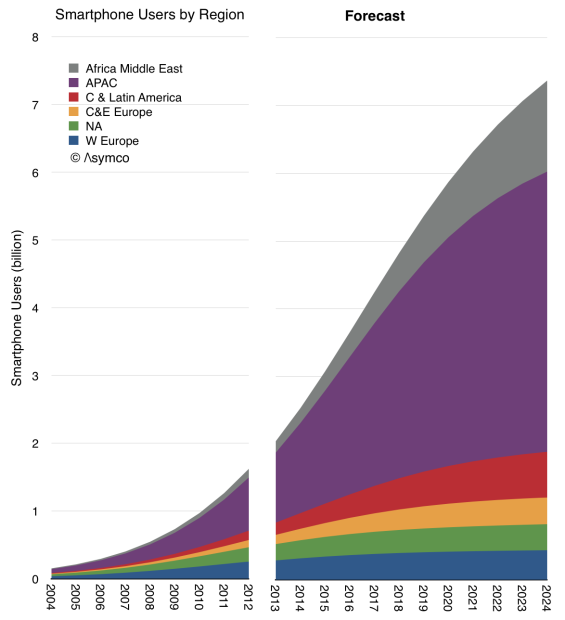 Three years ago the notion of smartphones becoming as ubiquitous as toothbrushes seemed far fetched but it’s now gradually being accepted. The smartphone is well on its way to becoming the most successful technology in history.

What will the smartphone do for us? Does smartphone ubiquity change anything? Besides increasing ARPU slightly in a $1.2 trillion industry? Besides doubling the size of the device business?3

Besides creating a $20 billion app industry? How do we assess the impact of having a connected computer in one’s pocket? In everyone’s pockets? With us all day. Every day.

Before we answer, we have to realize that the smartphone has been disruptive. Which means it has that special quality of not affecting the world in a predictable way. Its growth has been largely unforeseen and has affected the fortunes of the incumbents. As big and ubiquitous as it has become, the companies which were most intimately aware of it, its very own creators, were cursed by it.

The evidence is in this graph:

As the market exploded, the incumbent platforms all but disappeared. The innovators fell into the trap of treating the complex new product as a niche whose appeal was for selected “segments” described by the coarse data they were able to gather. Ubiquity itself was asymmetric to the basis of competition they established.

Today we can note how even the usurpers iOS and GMS Android are being swamped by the more modular alternative AOSP. Indeed, if we squint a bit we might notice that the OS/platform churn we see is part of a trend where the value is migrating up the stack from Components and Networks, through Devices and Operating Systems and on to Services and Experiences.

I call these the three mobile eras: (Firm names used are representative of a cohort and are not a complete list of participants.) 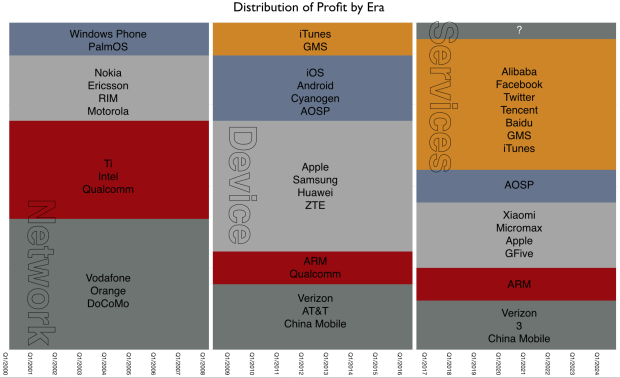 The thesis is based on Value Chain Evolution Theory which states that disruptions cause profits to evaporate from commoditized segments and condense in adjacent spaces, usually toward more modular, more convenient or lower cost innovations.

Note that the eras have specific time spans. If the pattern holds then we can overlay the time frame of smartphone penetration on these eras and even plot ecosystem entrants. 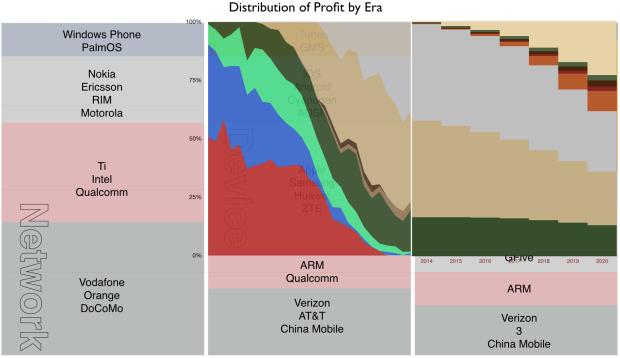 Disruption suggests that we are likely to see yet more shifting of fortunes. It means enabling new ecosystems to take advantage of the modularization of platforms. But how can it happen given the entrenched nature of the incumbent duopolists?

The clue lies in the first graph in this post: It suggests a geographic segmentation. The largest markets are large enough to sustain independent ecosystems. Note that China and Russia have already established alternative local service ecosystems. We may dismiss the possibility of localized Google and Facebooks in emerging markets but China and India are universes in and of themselves. But there are another 10 markets of more than 100 million users. That’s another billion users among them. 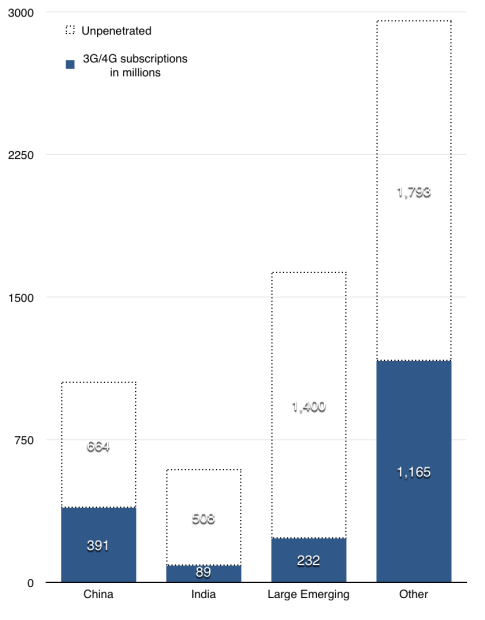 But it’s not just the availability of a vast pool of new users. The rapidity of growth of services like WhatsApp and SnapChat and Tencent shows that barriers to entry are low. We see increasing indigenous innovation in payments, logistics and business models in the newest markets. We see no shortage of talent and capital to start these businesses. We see increasing language and culture clustering in social media. We see political resistance to hegemony.

Focusing on the established, highly penetrated markets as an indicator of opportunity would be a mistake. Those markets foretell the rate of adoption but not the evolution of the value chain. Apple and Google will continue to anchor in those markets but there is no reason for the remaining two thirds of the world to follow. Indeed, there are incentives not to.

Incentives exist to localize services. Indeed, service businesses have always been local businesses. There are few global service brands. This has been true in retail, transportation, banking, hospitality, media and communications. Why should we believe that ecosystems can overcome the advantages of localization? Services are local because they are delivered by individuals and have high “touch” with the user.

Fundamentally, ecosystems are social systems and social systems have cultural and political dependencies.4 Technology does not homogenize unless it is centrally controlled. The control of mobile computing has already been abdicated by its creators.