In the postmodern computing world that we live in, the measure of success isn’t revenue or profit or units sold but the number of users that an ecosystem can attract. Therefore the monthly active user (MAU) unit of performance seems to be in vogue right now. E.g.:

Startups are aggregating these millions of MAUs in order to obtain valuations for raising capital1 and the faster the growth in MAUs the more “successful” the company is considered.

When companies are acquired it’s common to take the transaction value and divide it by MAUs to get an idea of “what an user is worth”. This is because there are no revenues to measure and MAUs are taken as a proxy. However, the process by which a MAU becomes a dollar of profit is, to put it kindly, circuitous.

For most (all?) it’s not yet clear how it happens especially since not all MAUs are created equal and MAU loyalties can change rapidly and if we added all the projected revenues each MAU will contribute to each app on her device we might reach some absurdity. In actuality, today, for the companies listed above, there are no revenues at all directly from their services.

In violation of this convention, there are some companies which manage to obtain revenues from their users. Two such are Apple and Amazon.  In the last quarter Apple reported having 800 million iTunes accounts.2  These aren’t MAUs since the activity level is not noted, but we do know how much is spent on iTunes and services. In addition, Amazon cites 244 million active customer accounts  representing accounts which generated purchases within the last 12 months.

The following graphs tell this story. First, the total number of accounts: 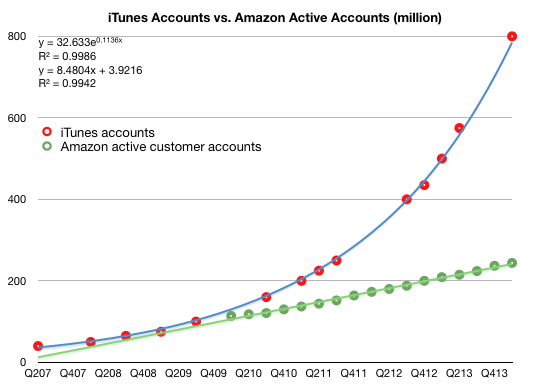 Note that I added trend lines to both graphs and their formulas.

The following are the revenue per account for iTunes (further broken into estimated iTunes segment revenues per account.) and for Amazon. Note that the vertical scales are different. 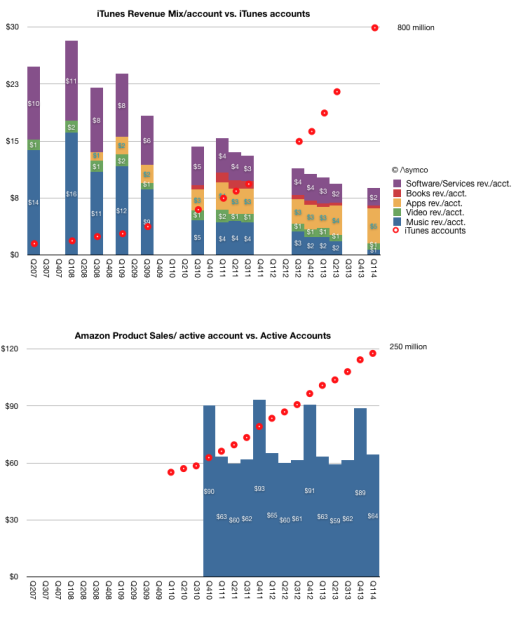 This view shows just how different the economic value of users can be. In the case of Apple, it’s growing its user base at (literally) exponential rates. The revenues per user does, understandably, decline. This is because new/later users don’t spend as much as early users. There might be some stability toward the later stages of adoption in revenue per user. The other point about iTunes data is how the mix of revenues has shifted from music to Apps and Services pointing out how users can be migrated across revenue sources over time.

In the case of Amazon it’s growing its user base at a linear rate (note equation). The revenue per account remains very steady however.

Broadly speaking, it would seem logical that the speed of user growth has an effect on the quality of those users. This relationship should guide further thinking about the quality of hundreds of millions of users acquired within a few months.

Apple’s user growth is a function of expanding its device portfolio and distribution. Apple has shown that there are limits this type of growth. Achieving 830 million or so iOS device sales within 7 years is an amazing feat and one can forgive not having achieved billions more since they managed to obtain significant hardware and service/content revenues from most of them and that those who reached higher figures more quickly didn’t manage the same revenue per user.

Amazon’s user growth is a function of expanding its logistics and merchandise mix. This is also not easy to do globally. Arguably, Amazon cannot scale in the exponential rates seen by Apple or the other MAU aggregators because it has to depend on trucks and roads and regulators to complete most of its sales.

I suppose, in conclusion, that there is no “right” or “wrong” business model for a user base. Both Apple and Amazon are doing well in building their customer bases and creating loyalties which will serve them well in the future. However whereas there is no right or wrong revenue structure per user, it seems to me that there ought to be some such structure. In most cases this remains a matter of faith rather than reason.