New market disruptions take root in non-consuming contexts. For instance, mobile phone photography began not because early phone cameras were good. They weren’t good at all but good enough when a camera was not within reach. The quality was poor but the photo taken would not have otherwise been taken, making a lousy photo better than no photo.

This rush to use the phone as a camera has meant that phone makers are keen to improve their product (so as to compete effectively with it against each other) and as a consequence they overtake the incumbent camera makers in quality as well as quantity.

The same phenomenon was experienced by fixed component “Hi-Fi” audio products. The quality of mobile music was poor but it was convenient and convenience translated into consumption and consumption translated into quality improvement and eventually the evaporation of usage of the traditional category.

Now consider how ad dollars are getting spent. The following chart shows the eMarketer forecast for ad spending mix across different media in the US. 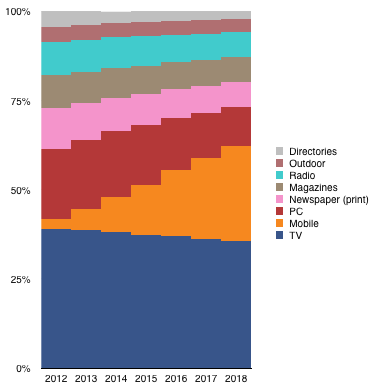 It would appear that the “Mobile” media is competing effectively against the other media types, especially the non-Mobile digital (i.e. PC-based experiences).

However, if we look at the absolute spending forecast the picture shows that Mobile is responsible for most of the growth in the overall spending. 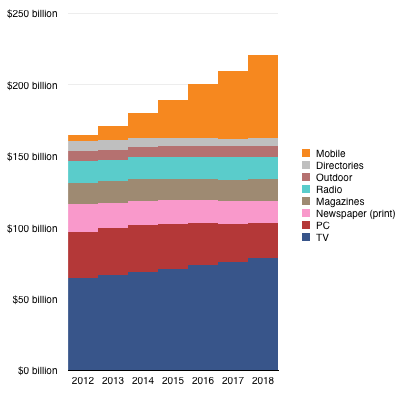 In other words, Mobile is creating new consumption of ad spending. If the forecast is correct, it suggests that if Mobile was not an option, ad spending would probably remain flat.

Mobile is capturing all the growth but it’s also the creator of this growth. The reason for this is that people are consuming mobile (i.e. looking at their device screens) more without necessarily looking at other media much less. Mobile is effectively creating consumption and therefore competing effectively against non-consumption.

That’s a lot of screen time which results in a lot more “inventory” of valuable ad space becoming available. Of course the ad buyers will buy the inventory. The value it provides is clear and they will increase their budgets to accommodate it.2

Because they focused on a job to be done that was not done well by alternative products they created consumption. They then used that additional consumption to expand into obvious adjacent use cases. The result was disruptive.

There was no escape for the incumbents. The approach of making a camera into a phone would be doomed as would making an amplifier into an iPod. The outside entrant approach was the only way to “pivot” if such a pivot was even thought desirable.