There are 80 million Mac users. The last 12 months saw sales of 18 million Macs.

As of the end of June there were 886,580,000 iOS devices sold. As of today the total is well over 900 million. One billion sold will happen well before this year is out. Estimates of current iOS users vary but they are probably at least 500 million and could be 600 million. 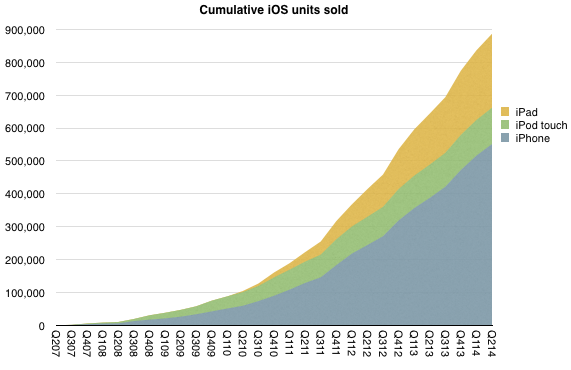 Adding iTunes usage to either Mac or iOS yields

This should make valuing Apple easy.

80 million Mac Users and 500 million iOS users add up to about $169.3 billion in sales per year. If we assume that the number of Mac users grows to 90 million  and 600 million for iOS then next year Apple should get another $200 billion from its population of users.

So over the next 30 months Apple sales should easily be higher than its current enterprise value.3

This exercise summarizes Apple’s valuation nicely: Apple is expected to keep its current customers for about a decade and then disappear.