One of the paradoxes of the “post-industrial” era is the aversion to application of capital to growth opportunities. Generally speaking, capital has become trapped in bank accounts as opposed to equipment which could be used to produce value. This aversion is rooted in many dysfunctions, chief among them being the misunderstanding of the purpose of the firm.

But there are exceptions. Illustrated below are the patterns of spending in property plant and equipment (capital expenditures) by companies that still recognize that there are opportunities to be obtained by investment in the means of production. 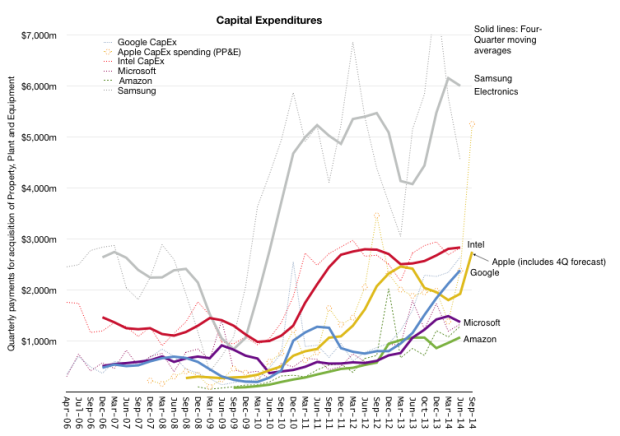 The highest spenders in this cohort are Samsung and Intel, both of whom spend mainly on semiconductor production equipment. Apple has been a big spender on production equipment and, to a lesser degree, on data center infrastructure. As the graph shows, Apple’s spending has been nearly at the same level of Intel but with recent volatility, suggesting shifts in production processes1.

Companies such as Microsoft and Amazon have been increasing their spending but since their assets are mostly data centers2 they have been considerably below the “manufacturing” investment level.

The interesting story emerging is Google. Its spending must include data centers primarily but the level is now reaching that of Intel and Apple. It actually spent more than Apple for the last four quarters. There might be a lot more need for infrastructure to support its users, but the revenues have not risen as rapidly as this line item

The question of what Google spends on is interesting. There are many projects which require capital including announced fiber networks but nearly $10 billion/yr. in capex is a staggering amount and I’m curious if its explainable as sustaining their current strategy or something emergent.