Amazon’s recent disputes with publishers (Hachette and Disney) shows a degree of market power that is closer to monopsony than to monopoly but this power is nevertheless real. It may not not be something that requires intervention, regulation or even scrutiny but market power is evident in both how companies operate and in how they are valued.

If you look at the following graph, it’s easy to spot those with “monopoly” power. The graph shows a short history of revenues/operating income and P/E ratios. Modest or no growth in earnings coupled with extraordinary high P/E ratios indicate that the market understands the business is not threatened by competition. 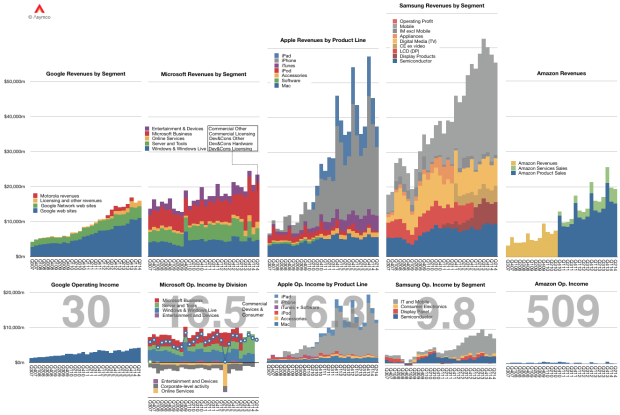 In contrast, “beleaguered” companies include those with great sales growth but no perceived long term prospects. This perception is evidenced by a low P/E ratio. It indicates how long the company can maintain its present level of profitability. I’ve highlighted Apple’s continuing, and indeed perpetual, beleaguered state. Excluding its existing capital base, Apple rarely gets votes for a life span longer than 10 years. One can see the same status in many Asian companies. Samsung is even more beleaguered than Apple by this measure.

The underlying implication is axiomatic as far as investments are concerned.: Being under threat all the time is undesirable.

But is this true?

One of the issues with monopoly/monopsony is that it leads to business practices and strategic priorities that are tainted by hubris. In contrast, the stress of competition leads to “paranoia” and to a sense of urgency which is blessed by innovative insight.

This is a corollary of Grove’s “only the paranoid survive” or Jobs’ rant on why Microsoft was unable to come up with breakthroughs. Grove and Jobs looked at dominance of a market (as either buyer or seller) and saw a curse. Their understanding of the human condition went beyond what the arithmetic of markets would suggest. Running a business and managing people who are asked to create things leads to this insight. Peering at spreadsheets doesn’t.

The observation to be made is that those who invest in companies haven’t caught on.