To avoid some repatriation taxes it also borrowed about $29 billion.

Of course, in the meantime, it also generated cash from operations.

Before the plan’s implementation, eyeing the cash allowed for easy tracking of the accumulation of retained earnings. After the plan it’s become a bit more complicated. The following graph shows all the quantities involved: 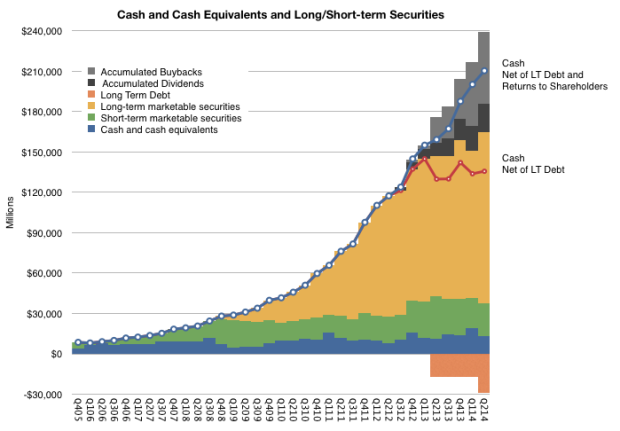 The graph lets us answer the question “What would have happened if Apple had not paid any dividends, bought back shares and taken on debt?”1

The answer is in the blue line. It would be about $210 billion today. There are about a dozen companies other than Apple worth more than that amount.

As the company is not growing as quickly as it used to, the slope of the blue line is constant (i.e. it’s nearly linear.) Though that might be seen as evidence of failure, it’s more useful to treat this vast quantity as a recognition of past successes. The company’s beleaguered status needs to be carefully preserved.