I received a few questions from Shirley Siluk of NewsFactor as a follow-up to my post on the trajectory of successful companies.

1. Do you foresee any hope for a turnaround for Samsung? If so, where do its best opportunities lie? 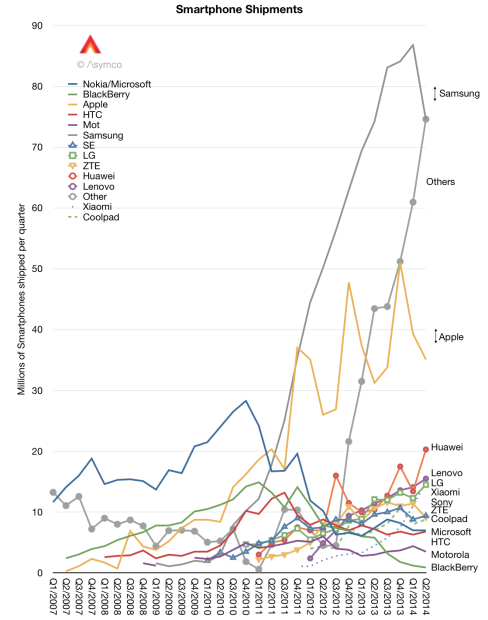 The smartphone business was a huge opportunity for Samsung and they took full advantage of it. Unfortunately, it’s a difficult business to stay on top of. The list of victims in that industry is quite long and there have been no long-term winners. Samsung’s operating model seems to be to invest as a ‘fast follower’ filling in the market after it’s established while leveraging capital intensive components synergies. That has also worked for them in consumer electronics (at the expense of Sony and other Japanese vendors). If the modus operandi does not change then their turnaround will depend on the creation of new opportunities/categories. Wearables may be such an opportunity but it may not be as big as the phone business.1

2. What has contributed most to Samsung’s decline? Which competitors are posing the greatest threat?

The fast follower strategy belies its own limitations: it implies a transience or impermanence in strategy. In a fast follower strategy it’s only a matter of time before late followers eat into the business, similar to the way that the fast follower ate into the innovator. Chinese vendors are poised to take more share. The way I said it in 2011 was that I saw in Huawei2 what Samsung was five years earlier. It’s easier for the low-end providers to move up-market and not at all easy (in terms of loss of margin) for the higher end to move down.

3. You mentioned the pattern of commoditization in all of Samsung’s markets — what would be the best way around this?

Commoditization is largely unavoidable. The way to survive as a business is to ensure you create new businesses or solve new problems. One hope that springs eternal is that through a “brand” a maker can ensure long-term margin survival. That did not help Nokia, Sony, or Microsoft. Brand is only valuable if it carries meaning and often that meaning becomes a fading product. So the short answer is that Samsung needs to create new categories or businesses. The challenge for them is that they need to control the platform and service infrastructure. These are currently out of their control and I’m not quite sure how they can regain that control.

I was wondering if you had any followup comments you could offer about Samsung in light of the announcement today that it’s developed a faster 60 GHz wifi technology — do you think this kind of technology, if it’s everything Samsung says it is, could provide the kind of corporate turnaround momentum Samsung needs?

Postscript: One problem with this prescription is that it’s considered impossible to execute and those who try to operate as repeatable innovation companies are punished with deep discounts and condemned as being “hits driven” rather than annuities. Woe befalls the manager who seeks this route.