12 months ago I asked How many iOS devices will be produced in the next 12 months?

Based on the analysis of Capital Expenditures (as forecast by Apple in their annual 10K report) I concluded “iOS unit shipments should be between 250 million and 285 million.”

The answer turned out to be 247 million.1 Including Apple TV the total would probably be around 251 million.

The resulting pattern is shown below: 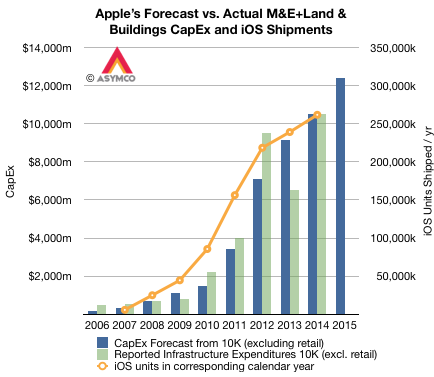 The company is currently anticipating spending $12.4 billion on non-retail CapEx. The spending for last fiscal year was almost exactly what was anticipated in the previous 10K. If we calibrate production (with a 3 month shift) to the 2014 benchmark, then 2015 calendar year would see about 310 million iOS units.

The big question is whether this will include Apple Watches. To answer this we have to make many guesses:

Does the company have a deliberate production plan for Apple Watches? What is the lead time? How quickly can production be ramped given channel and demand?

The non-retail capital budget is anticipated to increase by 18%. There are more moving pieces next year than usual, but directionally at least, CapEx remains a strong indicator of future iOS growth. Especially as it’s given to us a full year in advance.