Regardless of the difficulty in defining what is the correct “addressable market”, the more important question is whether tablets will be an ubiquitous object. Perhaps what we are seeing in the US is something similar to the MP3 player market or video game console markets where penetration saturated at around 50%. Perhaps tablets will reach PC levels which are closer to 80% of population or perhaps they will reach phone levels which are above 90%. The reason we can’t answer the question of ubiquity easily is because competing solutions can carve the usage out of a category “disrupting” it with alternatives.

The idea that jobs are the segments into which products fit and not demographics or product attributes is key to understanding this migration. The reason phones have subsumed more jobs onto themselves is because they have a rapid rate of evolution and because they have larger scale of economy and because they are conformable to our life spaces. As phones get better they take on more jobs and some of those jobs are those of tablets. The MP3 did not become ubiquitous because the phone took its job. Same for the video game and same perhaps for the PC and tablet.

But tablets are also getting better. At WWDC we saw how the iPad got a lot better for in terms of multi-tasking, data entry and edits. With the addition of more screen space it will get better still. The improvements will mean that it will possibly be hired for jobs that PCs are still uniquely good at.

If so then the tablets can continue disrupting PCs from below. As the graph below shows, iPads have captured a great deal of the growth of the overall “computing” market as defined by the PC. 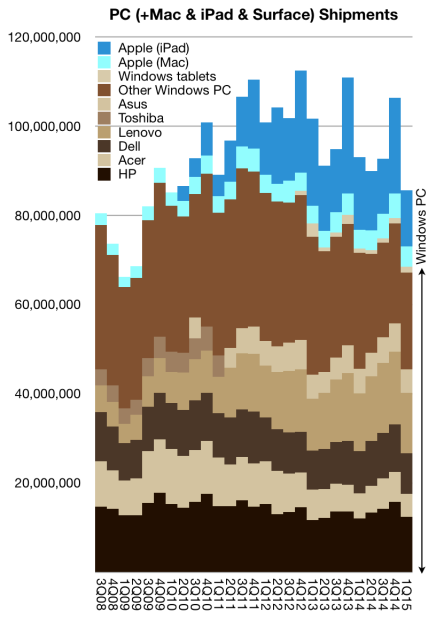 However even that growth has stalled. The combined PC+Mac+iPad market is declining suggesting that “computing” is inexorably being absorbed by the mobile phone.

Apple management remains bullish on the future of the iPad as a PC disruption. That is certainly possible to continue, especially as PC usage in enterprises needs to migrate in order to take advantage of mobile productivity. But before we see progress we need to see the iPad get better in meaningful ways.

The dimension of input and interaction seems to be about to get an upgrade. This is just what the product needs.