In my quoting of the “Cook Doctrine” I cited the primary criteria for Apple to enter a new market:

We believe that we need to own and control the primary technologies behind the products we make, and participate only in markets where we can make a significant contribution.

These criteria, often repeated, were certainly in force when Apple chose to enter the watch market. Apple has sought and achieved a significant market share and did so while owning and controlling the primary technologies behind the product.

I now turn to the significant contribution criterion to study the possibility of Apple’s entry into the car industry.1

The significance test shifts the speculation from whether Apple would build a car, to how many cars is could build. Making a few cars is easy (see first commandment of The Entrant’s Guide to the Automotive Industry). Making lots of cars is hard and hence significance in the automotive market (as in watches and phones) means achieving some degree of adoption, a higher degree of usage and a very high degree of profitability.

So what does being significant in the car business mean? Does it mean becoming the next Tesla? The next BYD or the next VW? How quickly?

Fortunately, we have something to compare an Apple entry to. Apple has made a “significant” market entry in phones and others have made entries in cars. If we contrast the rate of growth of Tesla, EVs, and Hybrids2 to the rate of growth of iPhones in their respective US markets, we obtain a test of significance: 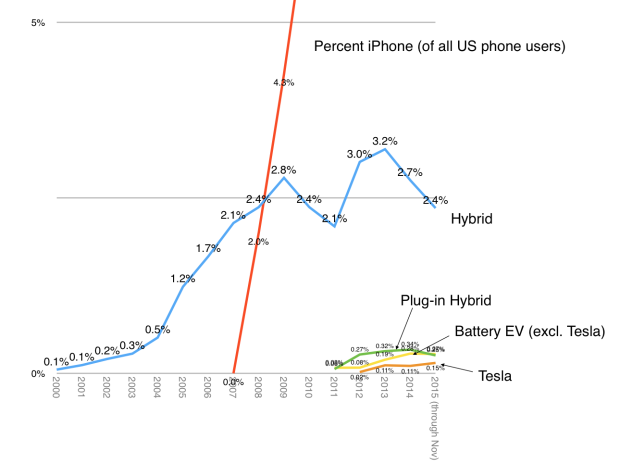 The graph shows the percent of sales for the alternative car technologies (and Tesla) vs. the percent of US phone users using iPhones (comScore). Here are the conclusions:

Within a similar time frame, the range for entrant company share capture spanned between 0.15% (Tesla as percent of US car market) and 35% (Apple iPhone percent of US phone market).5

The differences thus span two orders of magnitude (>100x). Put another way, if Tesla’s car entry was equivalent to Apple’s iPhone entry they would have delivered about 5.5 million cars rather than the 50.5k they delivered in 2015.

This wide gap in the impact of entry in the two markets has much to do with how modular are the systems being engaged by the entrants. An electric automotive system requires new infrastructure, new user behavior, and, in the case of Tesla, new distribution network and new post-sales support network. Offsetting this partially is a government subsidy.

In contrast, the smartphone communications and computing system leveraged existing infrastructure6, consistent behavior, at least initially, and the same distribution and support network. In addition, smartphones benefited from significant hardware and software and services ecosystems which encouraged third parties to add value to the system.

The difference in collaborative development and conforming user experiences (i.e. modularity) between the two innovations allowed the speed of change to be two orders of magnitude faster. The result is what I would consider significance for the iPhone vs. insignificance for electric vehicles to date.

Which leads us back to the question of why Apple would enter this market. If the absence of modularity prevents rapid change, that implies Apple cannot achieve any significant impact from entry.

We could ask the question differently: If they do enter, they could achieve significance only if they change the degree of modularity in the system. Think of it as allowing infrastructure leverage, consistent user behavior, wide distribution, wide support network, ecosystems, and component architecture; allowing rapid scale production and lower costs, etc.

Therefore the only way that Apple could justify entry would be if they “rationalized” the system into a sufficiently modular alternative. Only if we assume that change is possible could we then target share above the 0.1% insignificant change that has been demonstrated. They might even perhaps aim at 1% impact within a few years of entry. 1% was the iPhone target within the first full year of sales.

If system-wide change could be brought about and made uniquely (through some form of sustainable asymmetry) then the foreseeable share possibility quickly reaches the 10% range.

The last time that happened was when Toyota changed the way cars are designed and built.7