This shipment total is higher than any other computer company in its first 40 years. Actually there are no other PC makers that are 40 years old. One computer maker (IBM) is older but they only sold PCs for 24 years and what they still sell they don’t sell in high numbers.

That does not make it the top seller in a given year. Looking at only the Mac, Apple’s traditional form factor personal computer, Apple has only returned to the top 5 last year. Only if including the iPad it was the top computer vendor in 2011 and including iPhone, it was first in 2009. 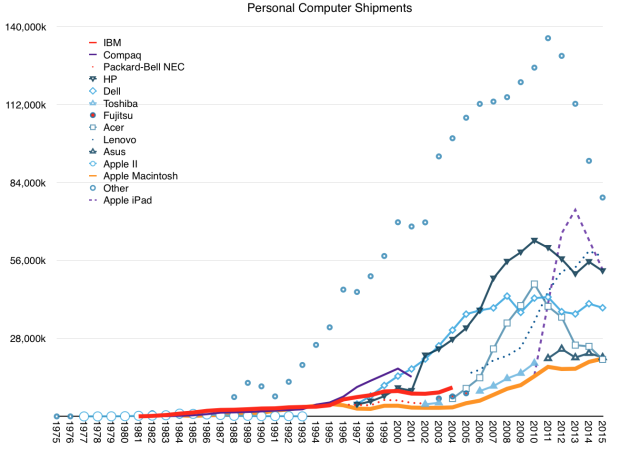 After having a 40 year run and after selling more computers than all American and Japanese computer companies put together, how should we think about the next 40 years?

First, clearly Apple shifted from being a “computer company”. It has already changed its name to exclude the word “Computer” but that has been interpreted as saying that it sells devices (which happen to also be computers.) The word “computer” is already archaic. We stopped using computers to compute in the 40s. We used them to make decisions, keep track of things, speed things up and then to communicate and then to entertain.

Devices, it seems, are what customers mainly use to do, well, everything. Computing has grown to encompass most activities we engage in. So is Apple then a device maker?

More broadly, irrespective of the name, is Apple at 40 still defined as a hardware company? Certainly Wall Street2 still think so. The conversations one hears clearly consider Apple’s future to be tied to the sales volume of specific products. At one time it may have been the Mac, another, the iPod and now the iPhone. This thinking is again a legacy of where the company was but mainly it’s a reflection of how revenues are reported.

We see a line item in the income statement that says “iPhone” and it has a big number next to it so we, of course, fixate on that big shiny number. But if we were to unpack that number and see why it’s so big we would discover that buyers are buying something other than what financial statements report.

Buyers are buying experiences, I hear you say. Yes, but more than that. Much more. They are buying safety, comfort, convenience, simplicity, productivity. They are buying modules to combine with other modules that help to do something. Something better. They are buying hope, satisfaction, escape or vanity. In other words they don’t know what they want but know when they have it. They trust products unseen which have a reputation of delivering that which they think they might like, without knowing what that is. By employing the product, and a whole lot more—effort, time, mental energy and repetitive actions—they learn to exploit a product to achieve satisfaction. 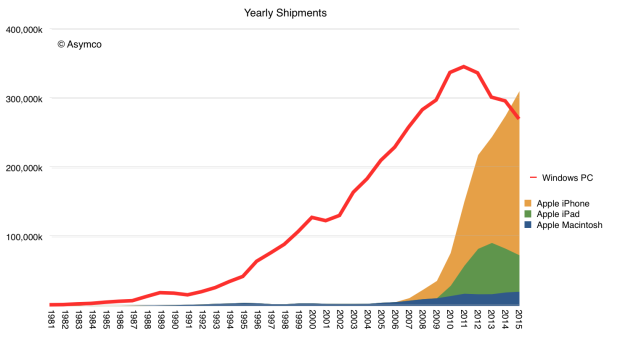 Products are enablers, as are experiences and software and ecosystems and services. They are modules used in a melee of activity to make the user feel they are making progress. And if that module is better than no module then it will command a price and if it’s better than another module or modules then it will command a premium. And if most people agree then it will be popular with many. And only if all these are true will it create a big number on a report.

And so we must search for other names to call a company that delivers an enabler that may lead to progress. Crude categorization like the reporting of finances leads to self-deception and a loss of opportunity to understand. Firms are often victims of this self-deception because they start believing that customers buy the things they sell. They start to believe that what is on their financial reports is a reflection of the value they create. It’s a simple mistake to make, but a mistake which leads to catastrophe. If its data is mis-categorized, by chasing numbers the company runs away from opportunity, leaving it to competitors otherwise unencumbered with knowledge of numbers.

Assuming Apple avoids mis-categorizing what it does, will it be a “solutions” or “services” or “brand” company? Is it, as I used to say, a “blockbuster manufacturing line”?

Yes, and still that’s not all it could be. Nor is it enough to understand what will come.

My simple proposal is to think of Apple (and actually any company) as a customer creator. It creates and maintains customers. The more it creates, the more it prospers. The more customers it preserves the more it’s likely to persevere. This measure of performance for a company is not easy to obtain. It’s not a line item in any financial report.

The closest figure we have is that today Apple has one billion active devices in use. We’re not told of the total users or total customers because Apple cannot count people or wallets as accurately as it can count active devices. But as imperfect as it is, this number gives us a way to get close to counting customers.

So we know that at least Apple has created a large number of customers. Knowing total devices sold and number in use means that we can be sure that 63% of all the computers Apple sold are still in use. This means that most customers are recent customers. That is not necessarily good news. New customers are not well understood. We don’t know how these new customers might behave in the future. 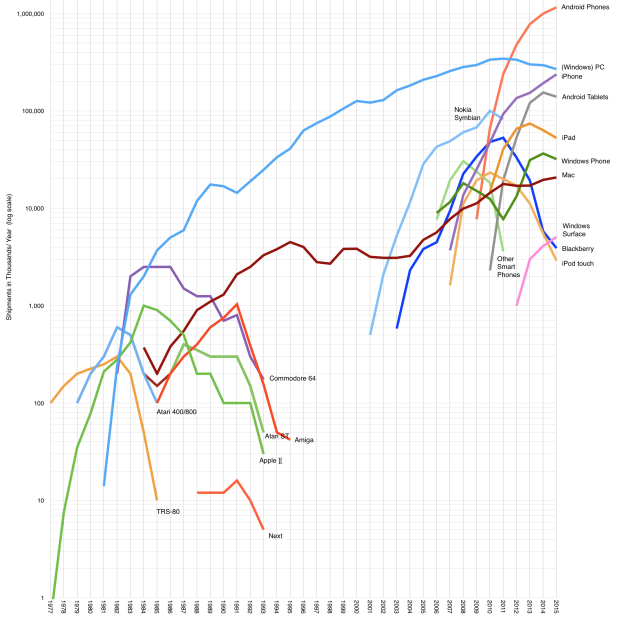 Will they come back for more of whatever Apple makes? If we look at the history of competitors or technology products in general, chances are they won’t. The industries Apple has been a part of are filled with one hit wonders. Companies which had parabolic trajectories and built no loyalties. Statistically speaking, success in Apple’s markets is always followed by failure.

These measures, rather than those of “comparable companies” might lead to different conclusions: That customers are loyal, that they will value the brand and that they are invested in a network. In other words, that they will buy from Apple again.

If we then factor in the size and persistence of Apple’s audience (customer base) we might conclude that there are factors which will allow it to grow rather than shrink. My analysis based on public data shows that the customer base has been increasing steadily. 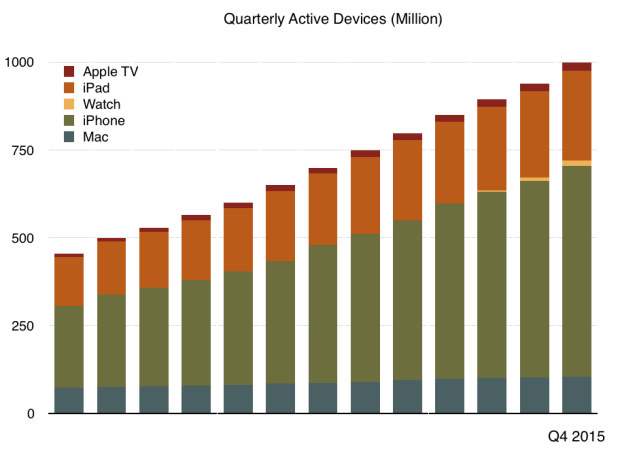 Considering this audience and the revenues generated, we can categorize the revenue by active device as follows.

Each bar represents that product’s revenue per day in a given quarter (from Q4 2012 to Q4 2015). Each year is therefore represented by a different color. Dark green for 2012, light green for 2013, burgundy red for 2014 and dark red for 2015. For example, each iPhone in use was generating exactly $1/day in revenues (including services and accessories) during the first quarter 2013.

This allocates all of Apple’s revenues to these products and by proxy to customers.

In summary, the “average revenue per Apple device per day” is currently $0.68. If we assume one unique user per device then Apple collects 68 cents from each customer each day.3 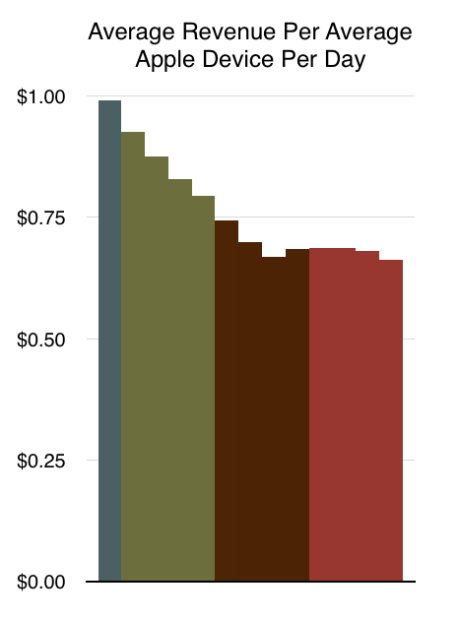 Combining the history of customer creation and customer preservation with the value obtained from each customer implies that the next 40 years will be about creating another large tranche of customers whose willingness to spend on whatever Apple creates will be relatively unchanged.

We don’t know the limit. One billion was hard to imagine even one year ago. We might see two billion devices in short order. Perhaps not. Perhaps as we have a multitude of devices about us all day the number will become less meaningful. But if the number of middle class customers grows and as Apple keeps its products within their reach, there is no reason to think that there will be a reversal of the last 40 years in terms of customer acquisition.

This analysis contradicts the current perception of the company as reflected by its stock price. That price assumes the audience will wither4 That is not insanity. It is what we could expect if Apple were unexceptional.

We could surrender to correlation and ignore causation but statistics show that such an approach rarely works.

Incidentally, this and a lot more will be discussed at the next Subscribe conference.