Berkshire Hathaway, led by Warren Buffett, now owns about $1.4 billion of Apple. Occasionally we hear about various “celebrity investors” taking positions in the company or exiting those positions. The last one I remember was Carl Icahn. He seems to have exited Apple before Berkshire entered. There are some who will act because of these decisions. You should not be one of them.

Nor should the management of the firm act in response to investor decisions or concerns. Management is specifically distinct from ownership in the corporate construct precisely in order to bring professionalism to the role. The manager must set priorities as they see fit, irrespective of what the transient owner might prioritize. The separation of ownership and management is one of the greatest innovations in commerce.

There are many opinions on what priorities should be. Delivering a specific financial ratio, achieving a certain market position, changing the world for the better. These have all been cited as top priorities. I happen to believe that what matters most is the creation and preservation of customers. That is because I see customer creation as causal to the other desirable outcomes and it is therefore the more important priority.

And this is why, whenever possible, I try to deduce how well a company is performing on this metric. The greatest companies (by market capitalization) today are certainly examples of achievement in customer creation. Facebook, Microsoft and Google are members of the “billion user club” or companies that crossed a billion active users.

But do they really have a billion customers? Microsoft has over 1.2 billion users but many (most?) of those users are using computers that their employers provide on which Microsoft software was installed. They may not have made the choice to purchase the tools they are using. Microsoft certainly has millions of customers in the form of “accounts” purchasing its products and services, but It’s not likely that there are a billion people who have directly chosen to buy a Microsoft product.

Facebook has over a billion daily users. Facebook users are certainly using the service of their own accord but they are not paying for the service. Quite the contrary, the actual customers of Facebook are companies buying an advertising service offered in the form of exposure to those billion users. The Facebook users are the product being sold, not the buyers. Thus Facebook’s total number of paying customers is probably only in the tens or hundreds of thousands.1

Same with Google. We don’t know how many accounts Google send invoices to but the number is very likely not even in the 100 million range. Its billions of users are beneficiaries of services but they are not paying Google/Alphabet.

Amazon has many millions of customers, if not billions. Prime membership is above 50 million but not above 100 million. Amazon may some day have a billion customers but there are limits to how quickly that can happen. The growth potential is governed by logistics and that’s as much an issue with atoms as it is with electrons.

Which brings us to Apple. Apple does not offer a figure on its specific user count, but we have some viable proxies:

These figures are also parts of patterns (shown below) which offer an indication of predictable growth. 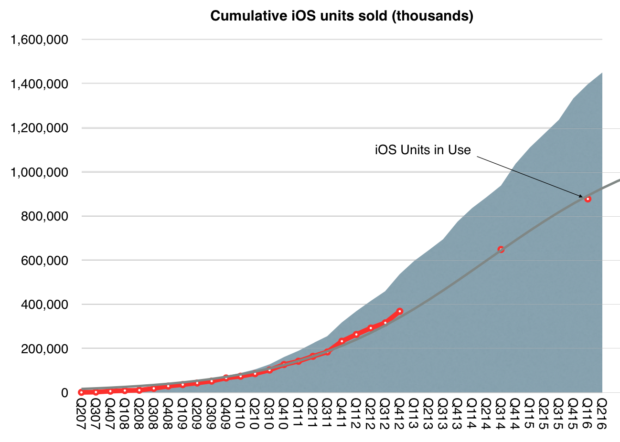 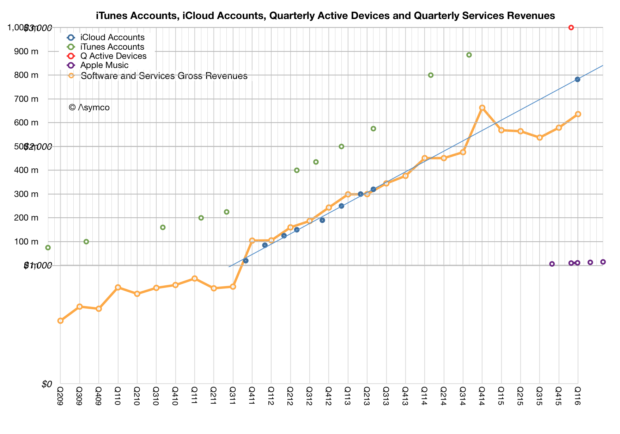 In addition to the absolute figures and their growth there is also the question of loyalty (frequently cited by the company), switching from other platforms (also frequently cited) and revenues. The company publishes specific figures on service revenues for consumer attached devices showing a run rate of $41 billion/yr in services for their device base.

In combination, a picture emerges which shows that Apple has nearly a billion customers. I can’t say how many with any precision but it’s certainly above 500 million (on the basis of iCloud and iTunes accounts). It’s below one billion because some users have more than one device.

Even though it has not happened yet, the trend is pretty clear. Apple will at some point in time have a billion paying customers.

What is more significant than the specific count is that these customers mostly chose to be customers individually. Some may have been given the products as gifts, but the vast majority bought the items for themselves. Apple benefitted from hundreds of million of individual purchase decisions.

Furthermore, having made the decision to purchase, chances are that they will do so again. Apple customers are a recurring revenue stream. In fact, it’s fairly easy to calculate that being an Apple customer is equivalent to spending about $1/day on its products and services, indefinitely.

Apple is not there yet, but a billion dollars a day from a billion customers is not inconceivable. That would be quite an achievement.