Apple is doomed. So are you. As mortals we are used to the idea of death. We do not dwell on it even though it’s inevitable. We do know that we’ll die but what we don’t know is when we’ll die. That certainty/uncertainty makes us, more or less, do everything that we do. And so we carry on. But companies die too. And when they die is also a mystery but it’s not at all clear that their inevitable demise determines what they do. If you think you’re immortal you may live dangerously. Perhaps as a result they live shorter lives than we do.

Life expectancy for humans has been rising but for companies it has been declining. Even more curiously, the richer you are the more likely you are to live longer but the wealthier a company, the more likely it is to keel over at any time. The longest lived small businesses live over 1000 years but the longest-lived large business is probably the East India Company that made it to the ripe age of 274. But that was before 1800.

In the modern, industrial era there are very few corporations that survived over a century and the Fortune 500 shows a turnover in inhabitants that resembles that of a plague-infested medieval inner-city. In contrast to their conservative, geriatric organic owners, synthetic companies are more likely to behave like live-fast, die-young punk rockers.

So it’s no surprise that Apple, at age 40, is seen as being well past its sell-by date. And yet it seems to be saying, somewhat faintly, “I’m not dead yet”. By generating more cash than can be comprehended by human observers and by controlling assets that are well beyond the means of many countries, they (it?) is confusing us with its persistence.

The confusion is exhibited in the following graph which shows the crises in confidence by that wonderful reflector of human perception–the stock market. By voting millions of times a day, the market shows us with great precision the totality of human emotion with regard to an asset. That emotion turns rapidly negative on Apple with surprising frequency. 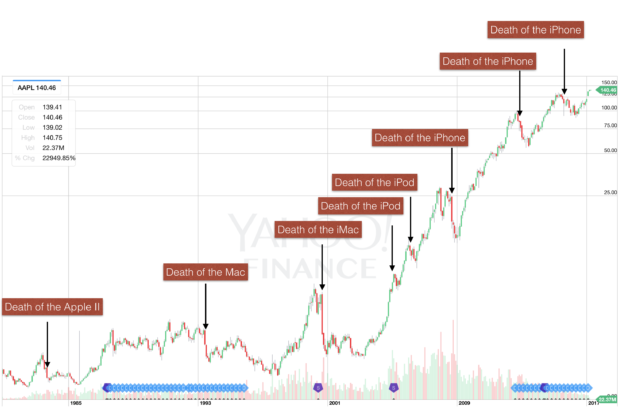 There have been over 8 bouts of collapsing confidence (exhibited by 40% drops in value) for Apple’s shares. Consider the latest where we’ve seen a 40% drop followed by 57% increase in share price over the last 12 months. 57% might not seem extraordinary for a small company but for the world’s largest market capitalization with the corresponding colossus of cash that it straddles, the robustness of brand and the loyalty of customers, the mind boggles.

The same thing happened in 2012 and 2008 and as far as I can tell the company has not changed one iota during that time. The same people, mostly, are in charge. With the same mission statement, and even the same product line. The resources, processes and priorities–the only determinants of the essential value of a firm–have not shifted.

One could try to suggest that even if Apple is unchanged, the world around it has changed. But if anything the world has come to match Apple’s own view: more mobile vs. fixed, more design vs. generic, more integrated experiences vs. more modular DIY.

The ethos of Apple is rigid so why is perception about the company so fickle?

If the graph above reflects perception about a constant entity then perhaps it charts how the world has changed rather than how Apple has. Perhaps perception revolves around a center of gravity far heavier and permanent. Perhaps the tug-of-war between fear and greed reflects more upon us that it does upon the object being observed.