The last quarter of 2016 was Apple’s biggest ever. $78.4 billion in revenues. 78.3 million iPhones. Both records. Earnings of $3.361 and cash reached new highs. The growth was modest but Services is now not just the second largest revenue but also the fastest growing, on track to doubling in four years.

The reason for this is the vastness of Apple’s user base coupled with the loyalty the brand engenders. The company reached one billion active devices more than a year ago and is quite likely to have nearly a billion users. Not just any billion either–the best billion most probably.

The realization that Apple benefits from extreme quantity and quality of customers has led some observers to defer the imminence of Apple’s demise. Share prices have risen lately to new highs and the ratios between these prices and earnings have started to come closer to the average of other large companies.

But enough with the reductio ad absurdum. Let’s look at the next quarter. The company has been very precise with its own offered predictions (guidance) so it’s a simple task to make an accurate forecast. The history of guidance vs. outcomes for revenues is shown below: 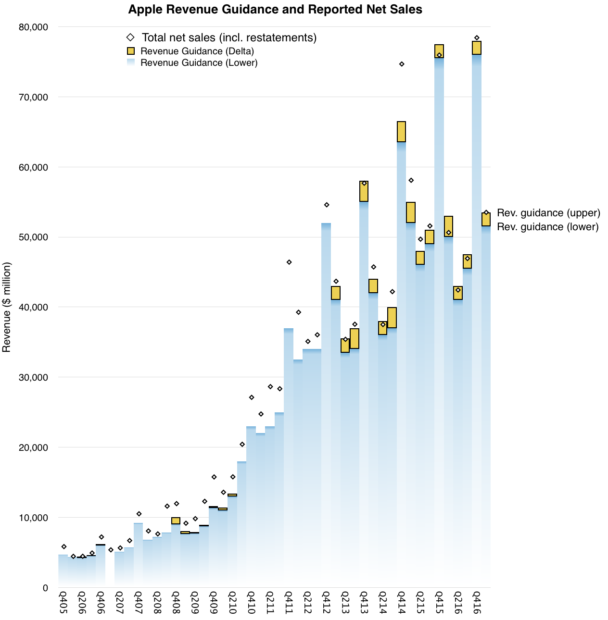 Placing the pipper on the upper edge of the guidance range was a safe targeting method for 11 of the last 17 quarters. We have never seen a drop below the bottom of the range but had a few overshoots, some huge. Doing this for the latest quarter and working backwards to the individual product contributions to revenue and using historical margin and cost patterns we can get the following core financial performance metrics:

I sent these estimates to Philip-Elmer DeWitt and I recommend looking at his survey of the other analyst estimates on his excellent Apple 3.0 blog.

Overall, the quarter is shaping up to offer slight growth y/y and indicating a plateau formed after the surge from the iPhone 6 surge in ’15. All eyes are on the “super cycle” for the next iPhone.

The reason it’s “super” is that the iPhone has a 2+ year cadence for form factor changes and the user base updates on a similar cycle. The demand is vast due to the user base and accumulated age of devices in use. Expectations are that supply will be offered to meet this demand.

If history is a guide then the next iPhone will be the best iPhone ever.