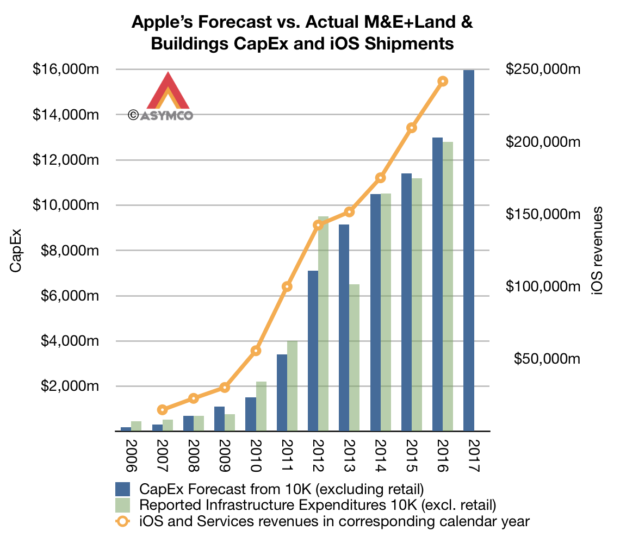 The company conveniently publishes a full-year forecast of these expenditures every fiscal year so by October we know roughly how sales will be during the following year. This pattern has held for 10 years so there is little uncertainty about the 11th year of iOS devices.

Although the two are not very tightly coupled, there is a causal link between them: spending on machinery and equipment for production leads to more production which leads to more sales (assuming prices are stable–which they are).

We are, as of the time of writing, half-way through a fiscal year and the quarterly spending can be inspected for any surprises. None are evident as the second fiscal year (first calendar quarter of 2017) shows a new high in capital spending at nearly $3 billion, placing us on track for the surge into the production of the new iPhone (and iPads.) 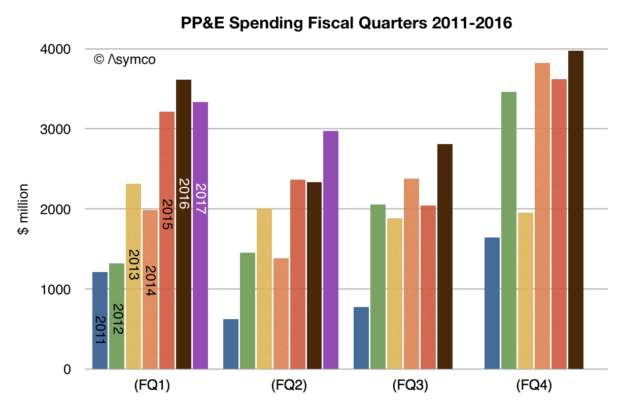 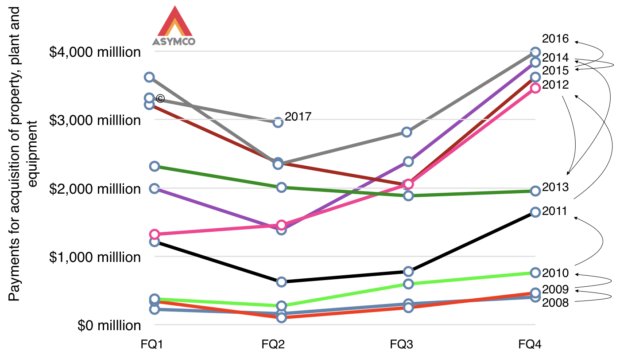 The quarterly relationship between sales and spending is less precise as equipment buying is “front-loaded” into a production cycle but there is a strong correlation nonetheless. 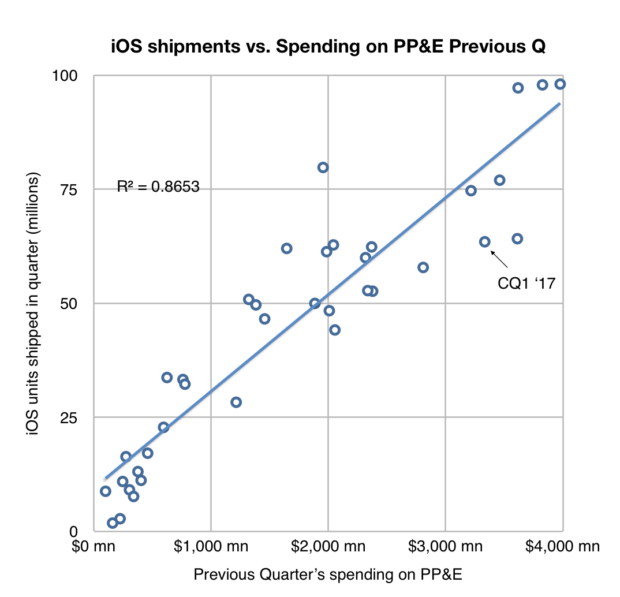 When looking through the data, quarter after quarter, year after year, there is a consistency and reliability to the spending/revenue relationship which implies, to me at least, a high degree of certainty.

This predictability, however, has not detracted from the volatility in Apple’s share price–an instrument designed to embody precisely this prediction.

Apple’s share price continues to see swings of more than 70% in any given 52 week period. In the latest 52 week period the shares traded between $89.47 and $154.88, a 73% swing.100% is not unheard of. Incidentally, S&P 500 volatility ranges around 45%. Apple is by far the largest company in the world and fairly old by large company standards. It should attract a certain premium of stability.

And yet it doesn’t. Skepticism around the company is continuously evident. It’s in the headlines written every day which concoct convoluted reasons to doubt future performance. It’s in the conversations I have with investors who question the tiniest of details in the design of a product (like headphone jack or home butto) in order to gauge their impact on the survival of the firm. It’s in the continuous parade of “disruptive entrants” or “established giants” ready to knock the company off its perch by virtue of simply existing.

Perhaps the panic it induces in investors with its reliable profits is Apple’s most predictable attribute.