Of course this is the average price and that average is on a trailing 12 months basis and measures some of the deferrals in income that exist for obscure accounting reasons.

Now that the new iPhones have launched, how probable is my prediction? The first mild surprise is that the total number of phone models has increased to 16. I had no prediction on product count but did not expect the 6S and 6S Plus to remain available. The following graph shows the total number of products in the mix (excluding color variations). 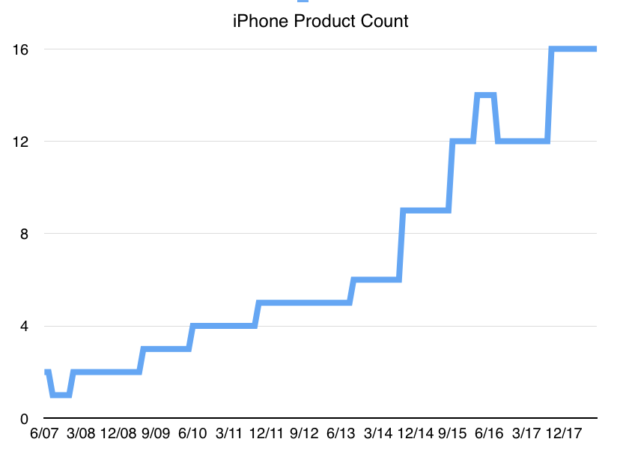 The second surprise was that the iPhone SE has been upgraded in memory from 16Gb/64Gb to 32/128Gb and that the new 32Gb version is $50 cheaper than the old 16Gb. The 128Gb remains priced the same as its 64Gb predecessor. 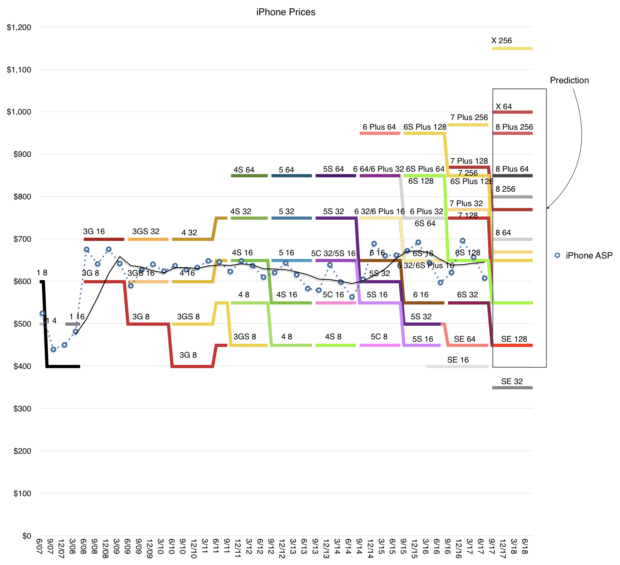 This means that the SE 32 now occupies a new lowest price band for iPhone: $350. It’s a remarkably capable phone at the lowest price for an iPhone ever. It’s $100 cheaper than the 5C 8 Gb which I bought 3 years ago.

At this point my prediction looks precarious. The lowering of the lowest iPhone price could drag the mix down. Remember that historically the iPhone average selling price remained constant while the top of the range price increased. The most popular phone sold was likely to be toward the lower end and, with new buyers coming from new markets, the more affordable phones were proving very popular.

Will the improved-but-lower-priced SE bring ASP down?

Well, of course, we have to consider the action at the top of the range. The new iPhone X 64 was introduced with a $30 increase over the 7 Plus 256. However the 8 Plus 256 is priced $20 lower than its predecessor. This is something of a wash in terms of impact on average price.

This places the top of the range at a new high, as expected, but it’s a higher high. We see an $180 increase from the previous high. I had expected a more modest $80 jump which was closer to the ~$100 jumps seen three times before.

Regardless of this surge in the top, the percent of units sold at that highest point is not likely to be very significant. X at 256Gb is a great product for enthusiasts but I suspect most people who want to experience the X will comfortably settle for the iPhone X 64.2

The interesting action is in the middle of the pack. The meat of the increase in product mix is right in the $650 to $850 range where Apple went from 4 products to 6. And they are all highly competitive 7 and 8 iPhones. These products are made available at the $30 to $40/mo. plan rates, the sweet spot of consumer phone financing. What I call the “dollar-a-day” for an iPhone plan. Perfect for those who are holding onto 6/6Plus or earlier models and are ready for an update.

Here, I believe, is where the sales action will be concentrated. I still predict that, apart from a transient launch period burst, the ASP will stick to its 10-year trajectory of mild increases (keeping with inflation.) In other words, the iPhone will cost about $650 for another year.

This season the iPhones X will be door busters but over the whole year  customers will walk out with 7 and 8 iPhones. The big year of the X will be next year, after the X+1 ships.

In summary, if you see the choice of Good, Better, Best, never underestimate the popularity of Better.