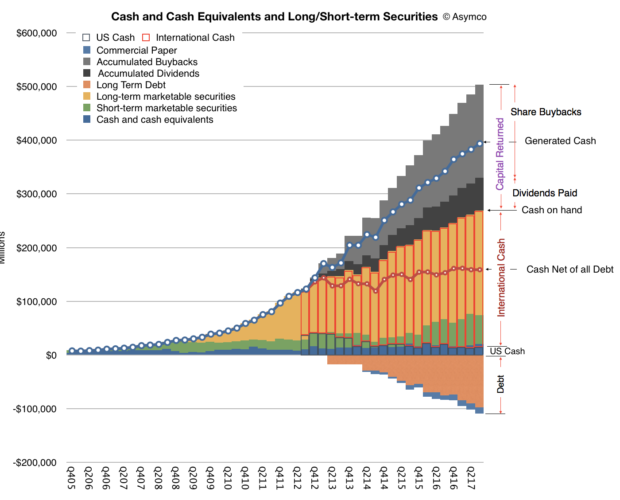 To the nearest million, as of the end of September 2017, Apple’s cash and investments totaled $268,895,000,000. Note that this includes investments in the form of short- and long-term marketable securities. Long-term marketable securities are not always accounted as “cash” because strictly cash is considered a liquid asset and some securities may not be sufficiently so. Nevertheless, most analysts would agree that Apple’s securities are sufficiently liquid to qualify as cash. Note that for archaic reasons this cash is separated into US and non-US holdings with $17 billion located in the US.

Indeed Apple’s cash is extraordinary. It amounts to about 30% of its market capitalization. One reason is that Apple has taken many loans, totaling about $100 billion.

Quite the contrary, Apple’s operating cash flow is eye-watering. In the 2017 fiscal year (ending September) Apple generated $63,598,000,000 from operations. The loans are not needed to operate. They are used to pay shareholders.

Because it’s their money.

Apple is holding it for them but if it has more than it needs it’s obligated to return it. You see, If you were to look for “cash” in financial statements you find it on the balance sheet as an asset. Since it is growing and since a balance sheet has to balance, there has to be a liability that grows in proportion to offset the cash asset. That liability is called Shareholder’s Equity. This is a “debt” the company has to shareholders. If it pays out cash to shareholders then it zeros out an asset and a corresponding liability. The net is zero as far as Apple is concerned but shareholders get something in return for giving Apple money in the first place.

Yes, welcome to tax laws. Although it generates more money than it can use, and that money should thus be returned to shareholders, some of the money is collected outside the US. US (and US only as far as I know) tax laws have a “repatriation tax” that is levied on money coming into the country.  . So after paying shareholders with the cash it had in the US, Apple had to borrow money to pay shareholders money they had outside the US.

Because then shareholders would get less than 70% of their money. They would probably complain and blame the managers for being incompetent. Such blame usually comes with a lawsuit attached.

Now Apple has no option but to pay the tax and repatriate the cash. It’s still a tax. The amount will be about $38 billion or about 15%. Previous repatriation “holiday” levies were around 10%.

The payments are called “dividends” and shareholders must treat them as income–a form of double taxation because these funds are after the company paid earnings tax and possibly repatriation tax. Apple does pay dividends regularly but because of tax inefficiency (i.e. because government policy discourages dividends) the company mainly buys its own shares and retires them.

Yes, it makes little sense but the math is simple. If the company buys its own shares and makes them disappear then existing shareholders will end up owning more of the company, making their shares more valuable. They can realize the gain if/when they sell the shares (and pay capital gains tax instead of dividend income tax on the already (double) taxed profits.)

No. The owners of the company remain the same: whoever owns shares owns the company and they can be traded in public exchanges. In theory they could reduce the share count to a single share and there would presumably be a single shareholder who would own the company, making it “closely held” but the company’s managers are still required to report and act as if it was public. Going private usually means a set of shareholders agree not to allow the shares to float on the open market and thus to also keep the affairs of the company out of public eye. It reduces liquidity and is generally harder for shareholders to exit their investment. This has nothing to do with reducing the number of shares in circulation–which is what Apple is doing.

The share price is an argument between shareholders and potential shareholders on the value of the company. It should reflect reality but many times it doesn’t. Over time however the math catches up with sentiment. In other words realization that there are fewer and fewer shares available compels people to not sell them, increasing the price. Short term investors tend not to pay attention to this but they are not the shareholders who Apple wishes to pay back anyway.

Simply, because it’s more than can be spent wisely. The company considers its mission to be very narrow: add value in specific areas where they can create tremendous value uniquely and under conditions (technologies and business models) they can control. Many such projects don’t require capital. Manufacturing, data centers and Apple stores require capital but R&D and sales not so much. Creating products is very cash efficient. For example, the iPhone–the most successful product of all time–cost almost nothing to develop; certainly nothing that required Apple to dip into its cash. Funding for the type of product development Apple does comes from existing cash flows and mostly consists of salaries for their employees.

It buys companies but usually small ones which are essentially acquisitions of teams and their intellectual property. Apple does not buy “business models” or customers or cash flows which is what large companies are valued for. Operationally, it’s also because Apple has a strong culture and it wishes to preserve it. Acquisitions dilute culture which is why integrations often fail. Statistically, large acquisitions are value destructive and the larger they are, the more likely they are to fail. Incidentally, when a company is acquired with cash that hole in the balance sheet is filled with something called “goodwill” which reflects some intangible value of the new asset. If and when the acquisition is deemed to have failed the goodwill is written off and so is shareholder equity. That’s how shareholders are robbed.

As individuals we think that having lots of cash makes us rich. For companies it’s the opposite. Cash is a liability. If you come across a company that is cash rich and has nothing else, its enterprise value will be zero. Companies are valued on their future cash flows, meaning their ability to generate cash, not how much they managed to keep. In other words, cash is a measure of past success and investors are interested only in future value. That future value comes from the intelligent allocation of resources toward a valuable goal. A company rich in cash but poor in vision is likely to be taken private or broken up and shut down. Cash is an IOU to shareholders with a thank-you note for the support through the years.