The iMac launched May 6 1998, exactly 20 years ago. It is not the most significant computer to ever exist. It was a clear descendant of the original Mac which established the “all-in-one” desktop computer category. That category, to which it still belongs, is a modest segment. The last time Apple reported portable sales separately was in late 2012 when the desktops/servers and pro systems combined made up only 20% of all Mac sales by units. If iMac were 10% of Mac sales, it would represent about 2 million units in 2017.

Desktops evolved into laptops and personal computing evolved into pocket  computing. Becoming more personal means more intimacy and this is leading to wearable computing. There is more beyond that to be sure.

But the iMac is a historically significant machine. It allowed Apple to start on a new trajectory. It did this by first offering a financial lifeline. Sales of Macs, which were at the time the only source of revenues for Apple, increased from 2.7 million to 3.8 million a year. This at a time when Windows PCs were shipping about 100 million units. That was enough to ensure survival. Today Mac units are five times higher while Windows PCs are about 2.5 times higher. The following graph shows the impact of iMac on the Mac’s trajectory. 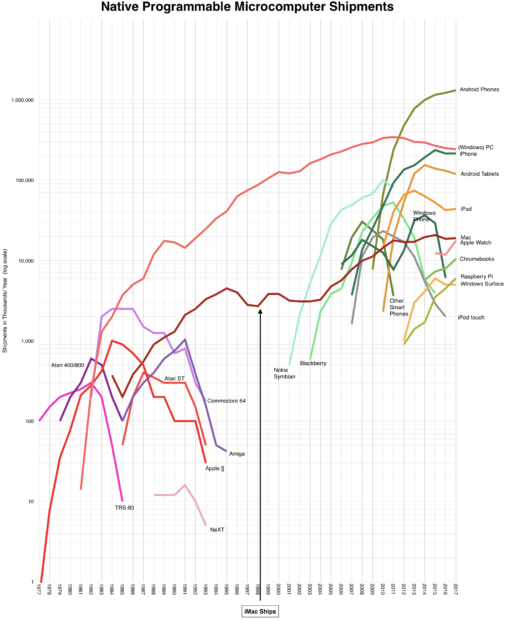 Second, the iMac was the first host of OS X, an operating system built on Unix which made it extremely flexible. iMac gave Apple the space for OS X to be developed and to be optimized for various hardware. The experience with OS X and its inherent scaleability (down as well as up) meant that it could be considered for the post-PC devices of the future.

Lastly, iMac’s design screamed “consumer product” which went from signaling inferiority to superiority. It set a standard for novelty, creativity and dynamism in the category that was considered second-rate. In the early 2000s consumers began to lead in the adoption of new technologies. DVD drives, internet connectivity, wifi, instant messaging, media consumption exploded. All the while institutions, hung up on legacy, began to block technologies. At this pivotal moment, the iMac spoke with its looks. It didn’t just imply a new order, it stated it.

To me the incredible aspect of the iMac’s entry is its uncanny timing. It came not only just in time to save Apple but exactly half-way between the first two ages of computing. In the following graph showing “share of computing” you can see it as launching precisely at “peak Windows”. 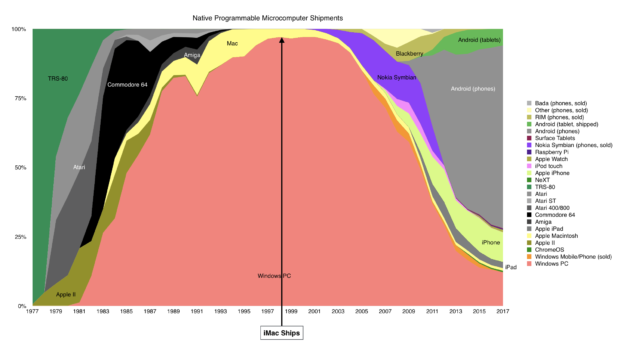 In retrospect you have to wonder if Apple, with the iMac, was lucky to survive into this next era or if that era would have ever happened without the iMac. It’s a question of causality which quickly devolves into an un-winnable argument about stochastic vs. deterministic existence.

Regardless, the result was felt more than seen. The computing industry was pivoting. The results are seen also in the graphs above. The iMac came right in the middle of the “desert” of platform choice of the late 1990s. By the 2000s mobile platforms detonated on the scene. The iPod was Apple’s first entry, in 2001, but it was not a computer. It was an appliance. A stepping stone at a time when the early platform contenders Nokia, Palm, Microsoft and BlackBerry surged before realizing that they did not have sound foundations upon which to build ecosystems. Their advances could not be consolidated.

The spoils went to the later entries of iOS and Android. The resulting disruption was shocking and disorienting. Not only did the old order get up-ended but the magnitude of the new was 100x the old. The iMac enabled at least a trillion dollars of value to be created and made Apple the biggest company in the world.

As you would expect, at the time, 20 years ago, none of this change was anticipated. iMac was a ‘cute’ computer. Toy-like and obviously unprofessional. It attracted and relished contempt.

So now we are at a point where the second era of computing is at its apex. With markets near saturation, the device business is inflecting from growth to possible stagnation if not decline. There are two platforms–though unlike Windows, Android is fragmented and iOS is not just on one form factor. Nevertheless there is stasis. The touch UI which begat nine billion devices is normative. The next interaction metaphor has not emerged as an obvious successor.

The question for today is what is the new iMac? What is the enabler for change? It’s not easy to spot. It is not the thing of the future but it points to the future.