At the latest Apple Summit in Los Angeles the question of Apple’s valuation was foremost on many minds. The illustration I used there to discuss valuation is shown below. 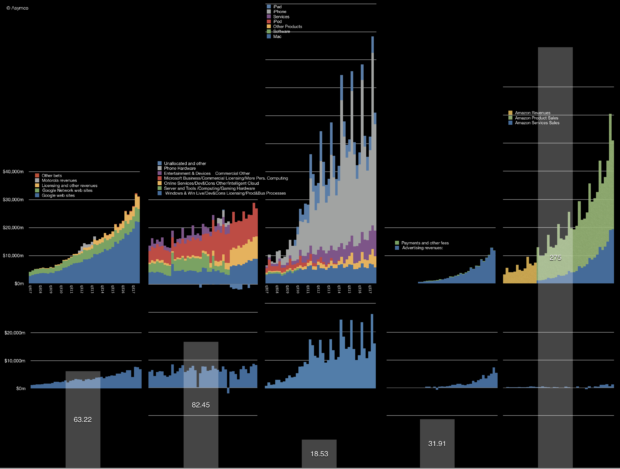 It shows the history of revenues (by reported segments) and gross margin for the five largest companies in the world by market capitalization. I have been publishing this illustration for five years1 in order to contrast the growth and perception of value between companies that might be considered comparable with Apple. Thus the graphs show the top and (near) bottom lines of the companies over an epoch of about a decade.2

In contrast with the histories above, there is a price set on the equities today. These prices are captured by the market capitalizations as follows:

Market capitalizations are interesting because they show perceptions of value. The traders in the equity are negotiating with each other on what the shares are worth and, as a voting system in a liquid public asset, share pricing is very representative of the perceptions about that asset. Representative because there are literally millions of decisions being made on a daily basis which determine this price.

The sales and profit data in the illustration above is about the past. In contrast the market engine is voting about the future. Any student of finance knows: the value of a company is the net present value of all future discounted cash flows (plus any current assets.)

So what would history have to do with it? What use is the trajectory?

This goes to a deeper question: How does history inform the future? What is the value in knowing previous performance when thinking about future performance? The common caveat in mutual fund prospectuses is “Past performance is no guarantee of future results”. We are repeatedly warned of this because it is within our nature to look at history and recognize patterns. But beware! At least beware those whom you might entrust with your fortune.

But consider that it’s conventional wisdom to also say that culture and preparation are the best ways to ensure a prosperous future. Ask athletes or coaches and they will say that practice and dedication lead to success.  Sports fans know that a team or player with a record of success is more likely to succeed in the future. In this way sport is, in many ways, a simulation of reality. Which is why it’s so popular: a metaphor of life teaches as well as entertains.

Knowing how to read ability as well as conscientiousness are keys to scouting talent. Again, it’s not a guarantee, but in various fields of human endeavor the past does predict, with high accuracy, the future.

This relationship between past and future is what education is based on. We spend our lives preparing and training ourselves and our children and their children with the implicit hope that this leads to better outcomes for everyone. We establish a pattern of success because it is the best predictor of future success. Practice, learn, commit, defer satisfaction, trade time for knowledge, fight, lose and try again. These are the qualities we look for in the past of individuals when assessing their potential for the future. Culture is everything, we are told. Build a track record, we tell the young.

So what does this have to do with valuation?

We can’t easily measure the cultures of persistence and perseverance in companies. Grit, guts, stoicism, fortitude, courage, the Finnish “sisu“. These are not measurable in financial reports. Yet our language is as filled with words to describe character and our financial reports are empty of them.

It’s left to investors to work it out. The exercise of relating the future to the past is the calculation of the ratio between Price (future) and Earnings (past). A high P/E ratio suggests repeated success from past success. A low P/E is a disbelief in a future repeating the past.

The P/E ratio thus allows us to say to what degree recent past performance is repeatable. I.e. how many `last years’ can we expect in the future. A P/E of 1 means a company is worth what it earned last year. A P/E of 10 means it is worth ten years’ proceeds.3

This P/E ratio is shown for the five companies above as the overlaid bars in the graph above.

Sure, you say, but it depends on the industry and circumstances. A future divorced of the past is more likely in an environment where there is rapid, chaotic change. The more volatility in fundamentals, the more uncertainty. Technology is changing rapidly and therefore it’s quite possible that Apple’s low P/E reflects this disconnect.

If so then what about its peers? Why would Apple be subject to different technological risk than other technology companies? All of the top five companies are considered “tech”. Indeed, Apple is perhaps the least technologically oriented as it has a brand and consumer orientation. It operates hundreds of stores, and sells design as much as it sells algorithms. It fundamentally tries to deconstruct human needs and package those needs in products.

Alphabet, Microsoft and Facebook primarily don’t “sell” to end-users. The revenues come from businesses in the form of advertising or licensing. They don’t have support staff, interacting with people who buy what they use. They need to understand needs but they trade other things. And Amazon offers AWS to enterprises as its own unique product. Other than AWS it operates a marketplace, acting as an intermediary.

Apple is a consumer company depending on consumer tastes as a brand. This is more typical of a non-tech company in a boring business of consumer brands.

But it’s not valued as either a tech company or a consumer company. Both have typically higher P/E ratios. In fact, Apple’s P/E ratio is lower than the S&P 500 and has been below that level for almost the entire history of the iPhone, regardless of growth rate.

A track record of hit products and the stability of a brand seem to be of no value. Perseverance, consistency and stability are not valued. If it were an athlete with a track record of world-record performance and a spectacular reputation with the public, it would not be granted an above-average pay for its performance.

In the past I’ve argued anti-fragility as a cause. In the context of the other companies, Apple is at the center of perceived vulnerabilities and is thus perceived as vulnerable . The other four are at the center of no competition and perceived as invulnerable. And yet Apple, so far, has survived. So have the others, but apart from Microsoft, they are much younger. I argued that Apple exhibits anti-fragility and has unrecognized robustness. Perhaps Warren Buffet now agrees and this is encouraging to the thesis.

Yet, at an even deeper level, in Apple’s valuation we see how culture is not valued. How the idea of character assessment is not applied to businesses. How ethos is unquantifiable and thus discounted. How markets, accustomed to weighing things, reflective of collective human judgement, demonstrate that we are woefully incapable of valuing that which matters most.