In June of this year Apple reported that it had paid a total of $100 billion to developers. That is the 18th such figure given in the 10 year history of App Store, making the progress of payments and hence revenue and spending easily trackable.

The other regularly reported figure is the business segment revenue where App sales are currently allocated. Now called “Services” this omnibus segment includes many other sources of revenues such as:

This combined Services segment is significant with $35 billion revenues in the last 12 months. This is quite a jump from 2016 when Services had crossed $25 billion. At the end of 2016 Apple said it expected Services revenue to double by 2020. With a growth rate since then of 25% the company is on track to reach its target one year early.1

Consumer spending on Apple services includes more than what it books as revenue since only the (typically) 30% of App Revenues is considered Apple’s revenue. Including the payments to developers, Services generated over $65.5 billion/yr in billings. This will reach $100 billion/yr in 2 years. The difference between reported revenues and consumer spending is shown in the following graphs. 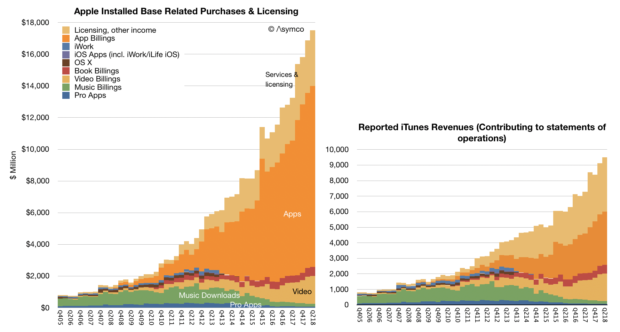 I described the visibility into App Store revenues (which is the orange area in the graphs above) but the other sub-segments of Services are much more difficult to ascertain. Of special interest is Other Services which includes very high margin services. As part of that there is a peculiar source of revenues: Google.

It’s known that Google pays Apple for the default placement of Google search within Safari on iOS and Mac OS. That payment is registered by Google as a “Traffic Acquisition Cost” or TAC. TAC is essentially payment for distribution where what is granted by the distributor is access to queries (traffic.) This way Apple acts as distributor for Google. So, for that matter, does Firefox which also receives TAC payments.

What is peculiar is that the amount of TAC paid by Google to Apple is becoming staggering.

A few years ago Google was paying over 20% of its revenues as TAC. Recently that ratio rose to 23%. Bernstein analyst Toni Sacconaghi estimated that Google paid Apple $1 billion in 2014 as TAC and that payments to Apple were about $3 billion in 2017. Now Goldman Sachs analyst Rod Hall estimates Google could pay Apple $9 billion in 2018, and $12 billion in 2019.

This is starting to look interesting but is it believable?

My own estimate of Apple’s Other Services (which includes TAC revenues) is a run rate of $15 billion for calendar 2018. This makes $9 billion (60%) from Google quite challenging but not impossible. The remaining $6 billion needs to account for Apple’s own cloud and subscription service revenues.

Does this make sense given Google’s spending? TAC payments to distribution partners in Q2 were $3 billion. The $9 billion/yr assumption implies a $2.25B/quarter payment to Apple. That would be 75% of Google’s distribution costs. That also sounds reasonable given the high utilization of iOS relative to any other platform.

An increase to $12 billion for next year is also quite a claim but it certainly is possible. I don’t have a basis for making this estimate but the assumption of growth leads me to conclude that the payments are tied to actual traffic generated.

In other words the two companies have an agreement that Apple is paid in proportion to the actual query volume generated. This would extend the relationship from one of granting access for a number of users or devices to revenue sharing based on usage or consumption.

Effectively Apple would have “equity” in Google search sharing in the growth as well as decline in search volume.

The idea that Apple receives $1B/month of pure profit from Google may come as a shock. It would amount to 20% of Apple’s net income and be an even bigger transfer of value out of Google. The shock comes from considering the previously antagonistic relationship between the companies.

The remarkable story here is how Apple has come to be such a good partner. Both Microsoft and Google now distribute a significant portion of their products through Apple. Apple is also a partner for enterprises such as Salesforce, IBM, and Cisco. In many ways Apple is the quintessential platform company: providing a collaborative environment for competitors as much as for agnostic third parties.