In the latest Apple Earnings report, Apple announced a few details that are relevant to the forecast of the business:

I added all these data points to the previous reported figures related to installed base, subscriptions and Services revenue. 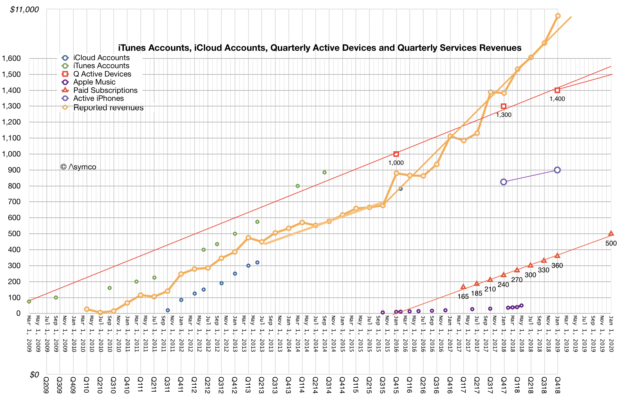 Note that all the data sets show a linear growth path. Most prominent is the paid subscriptions line which is growing at exactly 30 million per quarter. The new projection of 500 million by 2020 is exactly in-line with this projection.

This close relationship between iPhone usage and iPhone users means that we can approximate the entire unique user base for Apple. There might be “10s” of millions of users who use Apple devices but don’t use iPhones but there might also be multiple iPhones for some users1

In May 2010 I made the prediction that Apple would reach a billion users in 5 to 8 years. The prediction was based on the first 100 million iOS users. The company reached one billion active devices in a bit over 5 years and is about to reach 1 billion users 8 years since.

Apple stated in the latest conference call that very little of Services revenues depends on the any previous quarter’s unit sales confirming that Services is driven almost entirely from the user base. With almost a billion users, 90+% loyalty rate, 95% satisfaction, 120 million paid subscriptions and 75 million new users/yr, the analysis of Apple as a services company is becoming interesting.