Some say that advertising keeps the internet lights on. Advertising is a great business model for services but it has limits. There are only so many ad budgets to go around.  What will fuel an internet that outgrows all the ad money in the world?

This is the topic that Ben Bajarin and I will explore in our next event: SUBSCRIBE: The Future of Online Services.

Join us to learn more about the internet economy by studying the economics of the internet.

SUBSCRIBE is a 1/2-day event taking place on both coasts. Register at: 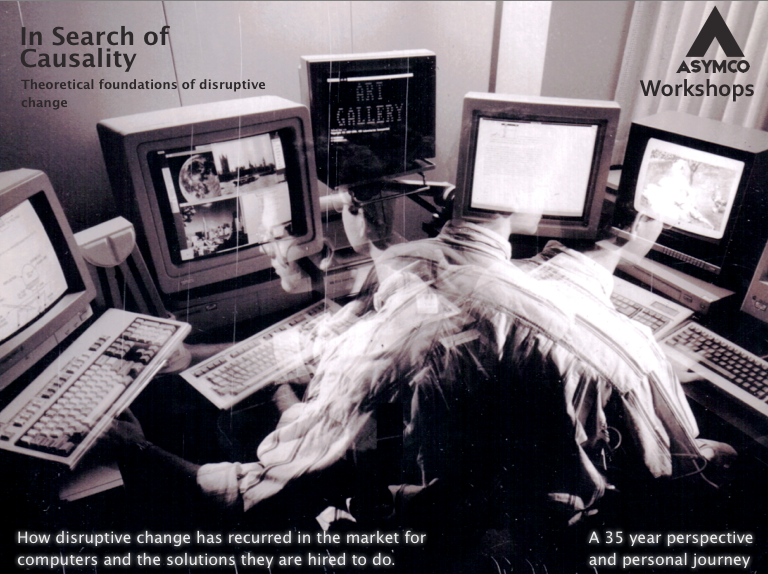 I will be in Australia in May and thought to invite local readers to join me for a few hours of in-depth discussion on the future of our industry.

Nominally, the topic will be: The history and future of computing using disruptive analysis.

I will present recent material (including the latest data from Apple) and we will have a few hours of Q&A.

We take on the future of TV again, given the developments and experiments hitting the news. Hanging in the air like a big matzah ball is the question of a catalyst to bring long form video to the age of software. Not just digital production and distribution but an integration of software into the product itself. We get there via a quick recap of Asymconf California.

My thanks to all those who made Asymconf California the best Asymconf ever. We had over 200 attendees and, for the first time ever, 50 workshop participants and a panel session. The venue was spectacular: IBM’s historic Almaden Research Center and special thanks to Paul Brody of IBM for making it available.

Engagement was stronger than ever and I believe we moved the ball forward on a range of topics: The workshops helped solve some of the mysteries related to Amazon valuation and the main event looked at the limits of growth. The State of the Union took a look at the post-PC world and Apple’s inflection point. The panel session took on the future of TV and, including the audience, we had input from some of the most influential companies in the space.

We will scramble to make the proceedings (in the form of an iPad download) available as soon as possible.

Normal blogging and tweeting will now be resumed.

Asymconf California is a week away. The workshops are sold out but we still have 20 seats available for the main event.

Don’t leave it to the last minute. Sign up now.

If you are available January 29th and/or 30th in the San Jose area we could use your help.

We also need five people to act as Camera Operators – we will provide Cameras and training, but any experience is a bonus.

We also need an Audio Mixer Operator – experience as a DJ is enough.

In exchange for a day of hard labor you’ll get:

Send email to volunteer@asymco.com to apply.

We recommend staying at the Hayes Mansion

The workshops will be held here on January 29th.

Update: Workshops are sold out.

Update 2: Use this link to reserve a special event rate of $149/night. You can also reserve by calling the number above and asking for the Asymco rate.

The disruptive history of California is remarkable. Whereas few nations can claim credit to one, California is home to at least four major disruptions: Semiconductors, recorded entertainment, venture capital and personal computing. And it did all this in less than one century. If any one place can vie for the title of “serial disruptor” it’s California. One success can be seen as luck, but many successes imply a system is at work. In this case session we discuss California’s disruptive history and put forward hypotheses on the what causal mechanisms are at work. We ask further whether California can still be the home of future disruptions or whether the system has broken down.

Geographically and culturally, California is closer to Asia than any other western market. It has always faced west more than it has faced east. Is there a symbiosis between California and Asia? Are its institutions adapting to a new center of economic mass? Is California leading in thinking or culture or is it being disrupted by a new frontier as growth moves east?

1:00 to 2:15 Guest presentations and Panel session

Guests are invited to debate or discuss points raised during the morning sessions. A chance for panelists to challenge or refute points made as well as for the provision of anecdotal evidence.

Does the tension between industries of Northern California and Southern California reflect an opportunity or a crisis? We will re-visit the narrative of what Entertainment is hired to do. We will review the differences and similarities of the technological creative process vs. the artistic creative process. We will see whether industrialized, commercialized art is subject to disruptive forces or whether there is persistent exceptionalism at work.

An update on Asymconf California, a discussion of engagement and why Android does not get enough of it, why Amazon likes giving away Fires and the causal hypothesis of Samsung’s success in smartphones. That plus announcing a new 5by5 show: High Density.

Asymconf is developing well. Workshops are at  90% capacity. I’m also delighted to also announce some of our distinguished guests: