From the VP of marketing for the Limo Foundation:

It’s interesting that this comment came on the day after Rob Glaser left Real Networks. Let’s take a stroll down memory lane of Glaser quotes:

(in 2003) “It’s absolutely clear now why five years from now, Apple will have 3 (percent) to 5 percent of the player market. … The history of the world is that hybridization yields better results.”

“Apple’s (market) share will go down if they continue to do this. The only way to presently put songs on an iPod is to (buy) them from iTunes.”

The (unforeseen) standard that emerged from the iPod is iTunes marketplace. It allowed Apple to establish itself as the premier and dominant merchant of all media including disruptive new media like apps. The iPod was “closed”, “siloed” and “locked-in” users. But it worked and grew and grew to the point where it set the standard.

All these numbers are increasing and accelerating. iPhone Platform Fastest Ecosystem Ramp in History.

More than half of the 3.5 million smartphones shipping to France this year should be iPhone variant, while Apple should account for about 20 percent of the entire cellphone market’s revenue. The company’s popularity will have helped smartphones as a whole more than double their share of France from 7 percent in 2008 to 16 percent this year. 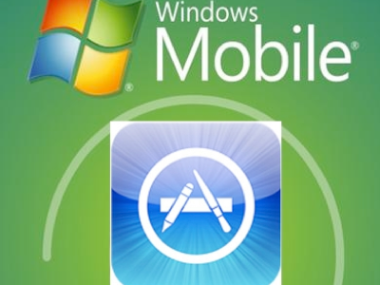 One observer has posted that WMM (Microsoft’s answer to iTunes App Store) has 520 apps in it now. The store launched in Nov 1 with 281 apps. That means there will be about 300 apps added in the first two months. The growth rate is therefore about 150/mo.

This has to be the slowest growing app store among all the contenders, though Palm may also be similar.

By way of comparison, iTunes App Store is growing at about 10k apps/mo. with Android about 3 to 5k/mo.

My bet is we’ll see the same thing in Korea. In both Japan and Korea the incumbents mounted campaigns against the iPhone and mustered means at their disposal (including major newspapers, TV and government agencies) to hinder Apple’s entry.

The reality however is that captive customers in those economies have always yearned for better products. There will always be a segment of the population that is informed about alternatives and will buy what works, at the expense of purchase decisions based on nationalism. It’s that group which will influence behavior over time.

This is how Toyota won against GM in the US. 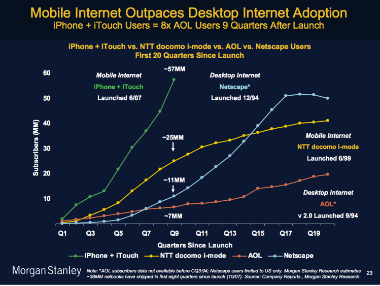 As I mentioned, I expect the green line to extend above 100 million in 3 to 4 quarters from where it currently ends.